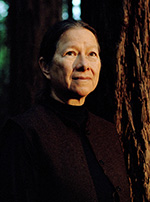 Anna L. Tsing is professor in the Anthropology Department at the University of California, Santa Cruz. She has received several awards and honorary titles for her research in the intersection of social sciences, humanities, and natural sciences, including the Niels Bohr Professorship at Aarhus University in Denmark.

Tsing has spearheaded anthropological research concerning the global environmental crisis and advocates a radical approach built on transdisciplinary dialogue in relation to the Anthropocene.

Professor Tsing’s research is based on close dialogue with other disciplines, while anchored in ethnographic methods and what she refers to as «acts of noticing». She is known for her innovative theoretical and methodological contributions.

Tsing has for the past 10 years contributed to research development at the Department of Social Anthropology (SAI). From 2013 to 2016, she was Professor II at SAI and TIK and made important contributions to the research project Anthropos and the Material through publications. She is currently a member of the advisory board for the research project Global Trout.