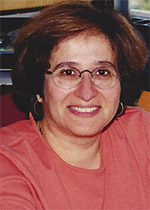 Elaine Cohen is Distinguished Professor at the School of Computing, University of Utah. She has received numerous honours and awards for her work in pure and applied mathematics and solid modelling.

Her PhD thesis in pure mathematics was published in the prestigious journal Transactions of the American Mathematical Society in 1974.

Cohen has been in close contact with research groups in Norway with numerous visits during the last 40 years. During her stay in Oslo in 1979 she developed, together with Tom Lyche and Richard Riesenfeld, the Oslo Algorithm that led to activities at many universities all over the world and at SINTEF in Oslo.

Some results in her paper on so-called box splines were used as a mathematical basis for modelling in animation films like Toy Story. Box splines became an important activity at the University of Oslo during the 1980s and 90s.