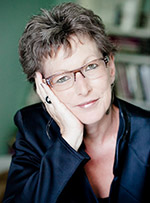 Nicola Lacey is an innovative and academically strong feminist legal scholar. Since 2013 she has been Professor of Law, Gender and Social Policy at the London School of Economics. In addition to a period at Oxford University (2010-2013) she has been associated with some of the world’s foremost academic institutions such as Yale and Harvard. She is a Fellow of the British Academy.

Lacey has given ground-breaking contributions to fields such as criminal law, anti-discrimination law and legal theory. She has gained distinction through writing books across the fields in which she works. Her most well-known book, from 2004, is a biography of one of our time’s most significant legal theorists and legal philosophers, H. L. A. Hart. The book is considered an exemplary biography, framing as it does both academic and personal aspects of Hart’s life.

Lacey has been to Oslo several times to lecture at PhD seminars in legal theory, and her work has been of great significance for many people in Norway both at and outside of the University of Oslo Faculty of Law.