UiO has bilateral relations with South African partner universities in a wide range of subjects and at all faculties. Today South Africa is seen as a strong research partner on the African continent, and is a popular destination for UiO students.

UiO is investigating new ways of obtaining a balanced student exchange with South Africa. Erasmus+ International Mobility of students and staff started from 2016 with UCT and UWC. UiO is also working with the University of Pretoria building up local capacity and knowledge on carbon capture and storage through a series of courses taught by UiO staff in South Africa.

UiO and its South African partners have many common research interests and co-publish within areas ranging from astrophysics, geology, climate change and medicine to education, cultural variations in languages, history and religion. UiO cooperates with all the prestigious universities as well as a number of disadvantaged institutions in South Africa.

In addition there are larger projects with external funding from the Horizon 2020 programme, the Research Council of Norway and the South African National Research Foundation.

Did you know that...

Collaborate with our researchers

Would you like to cooperate with us and our researchers in various projects?

Funding programmes for education and research

Cooperation with business and society 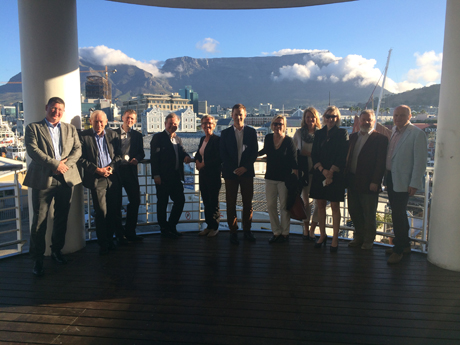 A delegation from UiO visited South Africa in 2015.

Did you find what you were looking for?
UiO > University of Oslo >
About UiO >