Welcome to The University of Oslo and the paintings by Munch!

This summer we open the doors to the University Aula and you can experience Munch in magnificent surroundings. Munch's paintings in the Aula are a major work in Norwegian monumental painting, and many do not know that the 11 paintings are the only decoration by Edvard Munch that is still in its original context.

Take the opportunity to see Munch in the center of Oslo and experience the beautiful Aula! 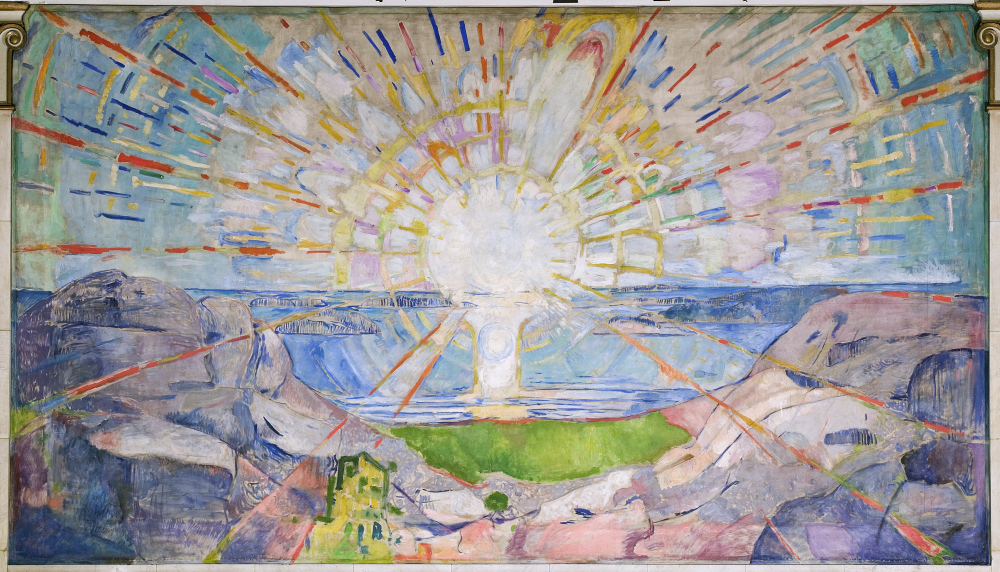 The main paintings are Solen, Alma Mater and Historien.

Solen (The Sun) is the central part of Munch's painting cycle. Munch wanted the Aula-paintings to accommodate "a closed and independent world of ideas", and that they should convey both the "special Norwegian and universal". The scorching sun that rises above Kragerø's archipelago sends its rays out to the canvases on both sides. It consolidates the Aula's theme 'enlightenment' and transforms the university's central task into a majestic, abstract image.

Alma Mater - mother earth that gives the milk of science

This painting expresses the university itself; here the lines are drawn back to the University of Bologna, which was originally called Alma Mater Studiorum (founded in 1088). The children in the picture explore the world, and this is how Munch described the mother who nourishes the children: "Alma Mater is still alma mater, but can also mean Mother Earth - It is a symbol of the more external boundaries of science… She gives the milk of science".

Together with Historien (The History) across the room, academia is portrayed as one big family through the generations.

Historien - a popular approach to academic studies and political nation-building

The old man is wearing a red hat that symbolizes freedom, and is dressed in patched clothes, like a fisherman. This is how he symbolizes Norway's history.

The symbol of the subject history was often a classic figure. In contrast, Munch shows the "history of the people", represented by the old worker and a modern boy. The picture is thus a popular approach to academic studies and political nation-building in the 19th century, where the artist's uncle, the historian P. A. Munch, was the pioneer.

University of Oslo
E-mail this page