- The greenhouse gas accounts will help UiO to implement new measures and make the operation of the UiO as sustainable as possible. UiO has, through initiatives such as Green UiO (Norwegian), already reduced emissions in several areas, but with the greenhouse gas accounts we have now obtained a quantitative and comprehensive knowledge base for further developing the work on measures, says Stølen.

In addition, UiO has administrative responsibility for a building mass of 472,000 m2 and rents 115,000 m2, which requires a considerable energy for electricity and district heating. Energy use makes up more than one fifth of UiO's total emissions. 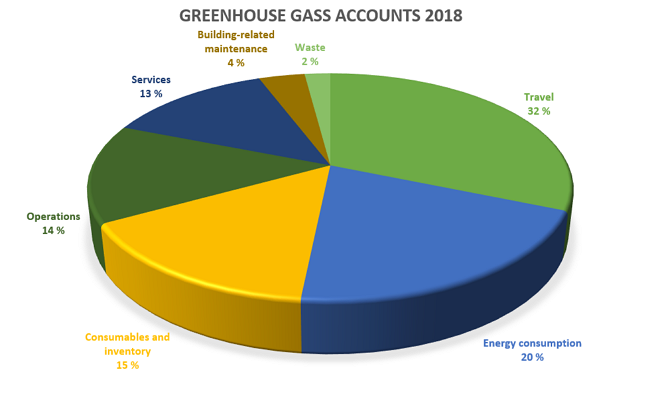 Statistics on greenhouse gas emissions include both carbon dioxide (CO2), methane (CH4), nitrous oxide (N2O) and fluorine gases (HFC, PFK and SF6). To be able to compare the ability of these gases to heat the atmosphere, they are converted to CO2 values. The quantities are called CO2 equivalents.

Follow-up of the greenhouse gas accounts

The greenhouse gas accounts will be followed up with measures and included in the ongoing process of Strategy 2030, but already now students and employees can provide input and participate in the debate on how the UiO's climate footprint can be reduced.

- Every country, every business, every city, every organisation, and each of us must mobilise to dramatically cut greenhouse gas emissions. Students and employees have already engaged, among other things with the flight call, and I look forward to the further work, Stølen concludes.

This year, the idea competition Rector's Challenge (Norwegian) will also be about how UiO can cut emissions. UiO invites all students to submit their ideas as to how UiO's climate footprint can be reduced. 1.-3. place is rewarded with NOK 10,000.