Harassment is not accepted at UiO. The aim of the guidelines is to prevent harassment. 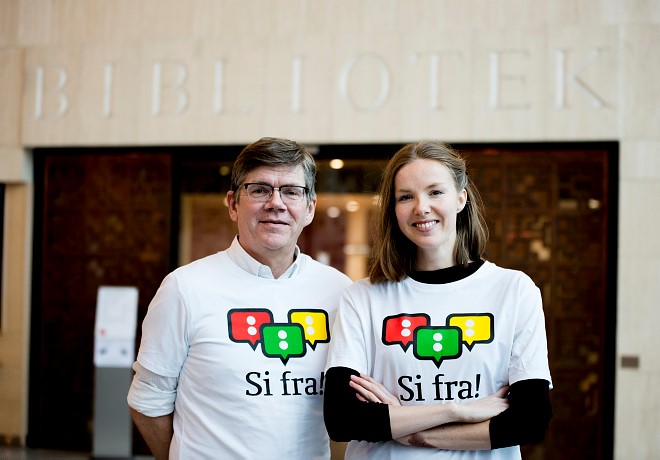 Rector Svein Stølen and leader for the Student Parliament in Oslo, Susann Andora Biseth-Michelsen are proud to present the newguidelines against harassment. Photo: Anders Lien / UiO

The guidelines consist of nine points dealing with behaviour, use of language,  power imbalance , text and images with sexually charged content and alcohol use.

Read the guidelines against harassment

Head of the Student Parliament, Susann Andora Biseth-Michelsen, is very pleased with the guidelines.

- This is really great! For us students it is a reassurance that UiO is taking today's challenges seriously. After "Me Too" It is good to see that the university is expressing clear expectations regarding the conduct of employees and students at the educational institution, she says.

The Rectorate is committed to ensuring a safe and inclusive work and student environment at UiO.

-We want everyone to feel safe and respected at UiO. Regardless of age, gender, ethnicity, disability, sexual orientation, position or power, says Rector Svein Stølen.

Other measures from the resource group:

In the same autumn, a resource group was established. The mandate was to review current policies and identify preventive measures and awareness-raising activities at UiO. The guidelines regarding harassment, which were adopted by the Board on March 12, are the result of the resource group's work.

The students have had an active role in the work

- Those of us on the Executive Committee of the Student Parliament have had the opportunity to contribute during the process, and we feel that our input has been welcomed. The guidelines will ensure a good learning and working environment, says Biseth-Michelsen.

- It is clear what the expectations are, and that violations of the guidelines will have consequences, she says.

Rector Stølen believes the collaboration with the students has been important.

- They know where the shoe pinches and what boundaries need setting and making clearer. It is also important that they feel ownership of these guidelines, he says.

Speak up at UiO:

Both for students and employees

The guidelines apply to everyone at the university. Regardless of whether they are the rector or an undergraduate student, engineer in the Estate Department or are employed in an academic role in a department. They also apply in the student associations.

The guidelines apply to everyone at the university. Regardless of whether they are the rector or an undergraduate student, engineer in the Estate Department or are employed in an academic role in a department. They also apply in the student associations.