New growth house for innovation and collaboration in life sciences

The new innovation unit the Life Science Growth House at MED and MN will offer guidance and tools to help researchers and students mature early-stage innovation ideas. The unit will create meeting places between academia and business and contribute to strengthening the interaction in UiO's internal and external innovation ecosystem. In this way, the faculties will contribute to a positive innovation culture and to put more knowledge into use. The Life Science Growth House will be launched in February and will open its doors in March 2022. 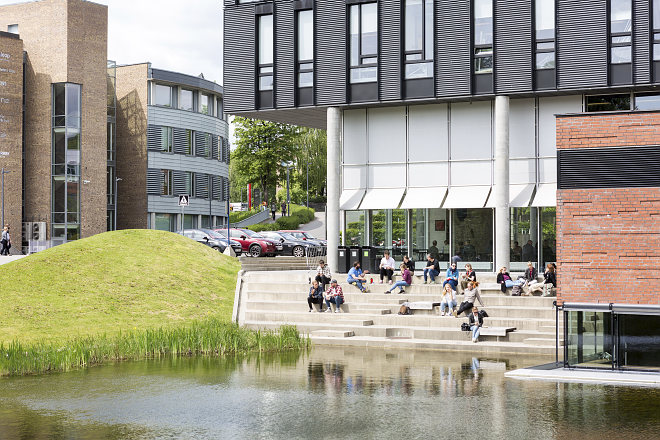 Oslo Science Park to the left in the picture now houses the Life Science Growth House that will provide services for researchers and students at UiO. Photo: Jarli&Jordan/UiO.

The work of preparing the ground for a new innovation unit for life sciences at the Faculty of Medicine (MED) and the Faculty of Mathematics and Natural Sciences (MN) has been ongoing for a year and a half. In September, the unit moved into Oslo Science Park. It has been named the Life Science Growth House in English and Veksthuset for livsvitenskap in Norwegian.

Low-threshold services for researchers and students

“The large, unrealized potential for innovation and entrepreneurship at our faculties is the background for establishing this low-threshold service with an open door for researchers and students. In this way, we will create the environment for building a positive innovation culture. The long-term goal is to put more knowledge into use,” say the deans at MED and MN, Ivar Prydz Gladhaug and Solveig Kristensen.

Both faculties are heavily involved in the work on the new life science building, and the deans have ambitions that the innovation unit the Life Science Growth House will eventually move into the building.

“The Government, the University of Oslo and Oslo University Hospital have great ambitions for the life science building. The

building will contribute to increased value creation and international competitiveness in life sciences. It takes time to build a positive innovation culture that is the foundation for us to succeed at this, therefore it is important that we strengthen the efforts in our innovation work already now and strengthen collaboration with both internal and external actors in our innovation ecosystem. We would like to commend the Vice-Dean for innovation and internationalization at MED, Hilde Nebb, who has led the work of establishing the unit on behalf of the faculties.”

MED will be the host faculty for the innovation unit, but the faculties are equal partners in this collaboration. Besides the two faculties, UiO's interdisciplinary life science initiative, UiO:Life Science, and the rectorate have provided support for the operation of the innovation unit. UiO's Vice-Rector for Research and Innovation Per Morten Sandset welcomes the initiative. In 2018, he gave Nebb the task of leading the work of planning a unit for innovation, business and public relations in the life science building.

“From the basic research at UiO, there can be many ideas for how the knowledge can be put

into use used for the benefit of individuals, such as patients, and society. However, many of the ideas with innovation potential are never developed further, partly because our system hasn’t been good enough when it comes to supporting researchers and students in the work of maturing the ideas to a level that makes them ready to get help from our technology transfer office (TTO) Inven2,” says Nebb.

“We will provide researchers and students with help both in the form of guidance and funding in the early stages so that they can buy services from others in our innovation ecosystem to get help with, for example, product development, regulatory issues, patenting and business plans or get mentors to develop the ideas further.”

“We will also create meeting places between academia and business so that expertise in the entire innovation ecosystem can be used to mature ideas, come up with new ideas and establish new collaboration. We also want young researchers to become familiar with different career paths both in and outside academia, and an internship scheme that students at MED were offered for the first time this summer, will be continued by the new innovation unit in collaboration with the Student Association for Medical Innovation (SMI) with the ambition of expanding the offer to MN.”

Nebb says that this autumn the unit will prioritize seminars for leaders so that they gain increased knowledge about how they can support their employees in their innovation work.

Oslo Science Park is not a randomly chosen location for the Life Science Growth House.
“Our job will be to build bridges between our knowledge environments, business and relevant partners in UiO's innovation ecosystem. In Oslo Science Park we are close to many of the actors in Oslo Science City such as Oslo University Hospital's new development centre, business clusters, UiO's own Centre for Computational and Data Science (dScience) which houses several projects next to us and our technology transfer office Inven2 and the student accelerator Insj that we will collaborate with,” says Nebb.

“We will also work closely with research administrative departments at both MED and MN and the central research and innovation administration department that have good systems to, among other things, support researchers in application processes for external funding.”
The services established by the innovation will be available for life science environments at the entire UiO as well as Oslo University Hospital and Akershus University Hospital.

“UiO’s close link to the university hospitals is important for the patient-centred, applied research where the goal is to solve the challenges in health service of the future, such as better diagnostics and treatments,” says Nebb.

In the coming months, the team that has employees at both MED and MN will work to develop the new services, tools and meeting places.