Laura Nuño de la Rosa, IAS-Research group, University of the Basque Country, is visiting the Science Studies Colloquium. The seminar is open for everyone. 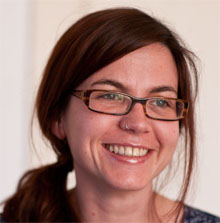 In this presentation, Laura Nuño de la Rosa applies a computational analysis to study the dynamics and conceptual structure of one of the main emerging problem agendas in evolutionary biology: evolvability. She have used CiteSpace, an application for visualizing and analysing trends and patterns in scientific literature which applies co-citation analysis to identify scientific specialities. She analyses the main clusters of the evolvability co-citation network with the aim to identify the main research lines and the interdisciplinary relationships that structure this research front. She then compares these results with the existing classifications of the evolvability concepts, and identify four main conceptual tensions within the definitions of evolvability. Finally, she argues that there is a lot of usefulness in the inconsistency the term evolvability is used in biological research. she claims that evolvability research has set up 'trading zones' in biology that make possible interdisciplinary exchanges.

Laura Nuño de la Rosa is a philosopher of biology working on the history and philosophy of developmental biology and evolutionary developmental biology. Graduated in Humanities, in 2010 she obtained a Masters Degree in Biophysics at the Autonomous University of Madrid. Her master project dealt with “The Origin of Paired Fins” and was carried out in the Department of Theoretical Biology, University of Vienna. In 2012 she defended her PhD dissertation on "The Problem of Organismal Form in Contemporary Biology" supervised by Prof. José Luis González Recio (Complutense University, Madrid) and Prof. Jean Gayon (Université Paris 1-Sorbonne). After defending her PhD, she joined the KLI Institute (Kloserneuburg, Austria) as a post-doc fellow. Laura Nuño de la Rosa works currently as a scientific editor of a major reference work on evo-devo in collaboration with Springer.