The University of Oslo is conducting a number of life-science projects that share the same goal: to address the increasing problem of antibiotic resistance, considered by the World Health Organization (WHO) to be one of the greatest health threats the world is facing. Interdisciplinary collaboration is required to solve this huge challenge to societies worldwide. 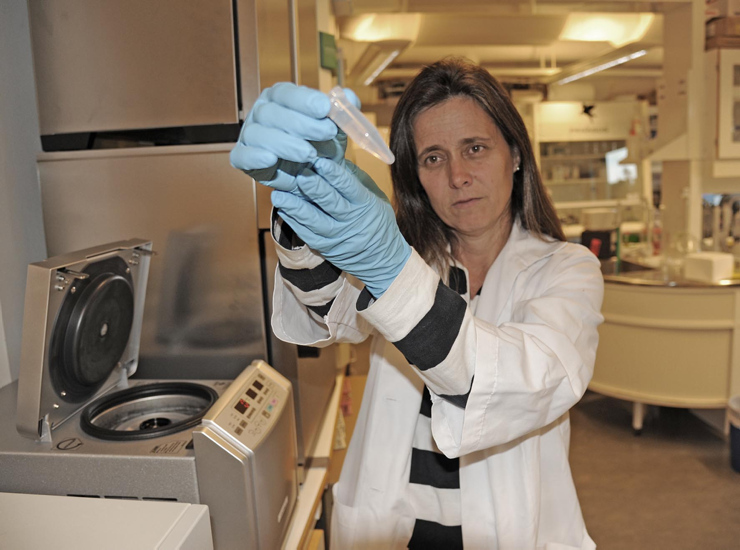 Professors Fernanda Cristina Petersen (photo) and Anne Aamdal Scheie head the CrossTalk project. In this project, they investigate how bacteria in biofilms on teeth and mucous membranes communicate with each other and with their host cells. The objective is to develop agents that will disrupt this communication and thereby do away with the bacteria. Photo: Per Gran, Faculty of Dentistry/UiO.

Bacteria that develop resistance to the antibiotics that we use to treat infections represent an increasing problem that threatens public health.

‘Antibiotics have been used to cure life-threatening infections for 70 years. Now we can see that the bacteria are striking back and have developed resistance to the ‘miracle drug’. We risk that antibiotic resistance develops into a global threat to public health. If antibiotics lose their effect, this will have significant consequences for humans. Resistant bacteria may cause increased mortality, more diseases, longer hospitalization periods and obviously increased costs for health care,’ according to Hilde Nebb.

‘Although the problems associated with antibiotic resistance may be huge, they can be solved by interdisciplinary collaboration between basic research, clinicians and industry. Progress in the fields of genetics, genomics and informatics will change the way in which infections and diseases are diagnosed and provide us with the ability to defeat the diseases more quickly when bacteria develop antibiotic resistance,’ Nebb explains.

‘These technological advances will definitely result in even faster diagnostic tools that will improve the way in which we will use antibiotics in the future. I am convinced that our excellent research communities in the field of life sciences at UiO will be highly important contributors to these efforts.’

The University of Oslo is undertaking a number of projects in the field of life sciences aiming to address the increasing problem of antibiotic resistance. This is the third in a series of three articles from UiO:Life Science on this topic.

Read the first article: Better digital management is needed to control the use of antibiotics.

Many research groups are on the case

Others seek to understand fundamental mechanisms inside the bacteria, how they develop in general and how they become resistant to antibiotics. Some are investigating bacteria in so-called biofilms, a kind of mucous layer that protects the bacteria against antibiotics and our immune system. Others are seeking to develop new drugs.

Here you can see a selection of UiO’s life-science researchers who are working on issues of antibiotic resistance:

Research to help ensure more sensible use of antibiotics