Henrik Marstal takes a critical look at the marketing of Nordic music, and the vague and oftentimes excluding term “Nordic cool” 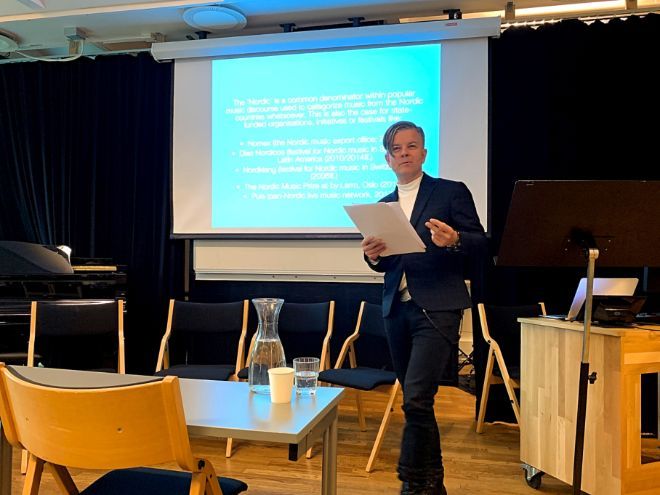 Friday October 11 the research group Nordic Sounds: Critical Research Group at the Department of Musicology hosted a Nordic Study Day. The day started with a lecture by Henrik Marstal from the Rhytmic Music Conservatory in Copenhagen. The lecture was called “Not Nordic Enough? Nordic Cool as a Janus-Headed Strategy for Artistic Inclusion and Explusion,” which is also the title of Marstal’s chapter in the book The Nature of Nordic Music (Tim Howell, ed.) which was published by Routledge last month.

Marstal points out that “Nordic cool” and constructed ideas about Nordicness can be excluding. Even though the term is fairly vague, it appears that “Nordic cool” has some general characteristics associated with a closeness to nature and the effect of the Nordic light, forms of subdued colors, melancholia, isolation and introversion, as well as minimalism and cleanness. This conception of Nordicness has several limitations, and among other things it leads to the frequent exclusion of artist from minority backgrounds, and a narrow selection of musical genres being included in “Nordic cool.”

Marstal also stressed that “Nordic cool” can indicate an exaggerated difference between Nordic music and the Anglo-American and European traditions. To illustrate the artificiality of this divide he pointed to bands and artists from outside the Nordic region whose music fits the description of “Nordic cool,” as well as examples of music from the Nordic region which is typically labelled “Nordic cool,” but contains multiple elements from other musical traditions.

After the lecture, Marstal took questions from the audience along with Stan Hawkins, leader of Nordic Sounds. The question of whether there is an urban “Nordic cool” was answered in the positive by Marstal and Hawkins who confirmed that there are examples of musical representations of all the major Nordic cities.

They also mentioned the frequent use of cityscapes in visual marketing of the Nordic region in tourist brochures and similar material. Gender differences in the perception of “Nordic cool” were also discussed during the Q&A, and Marstal tentatively concluded that it seems like female voices are more stereotyped than male ones in a Nordic context.

The thought-provoking lecture provided a critical look both at the marketing of Nordic music, and how constructed ideas about Nordicness are perceived inside and outside of the Nordic region. “Nordic cool” might be an effective marketing tool, but it indicates an over- exoticization of the Nordic region, and it excludes many Nordic artists.