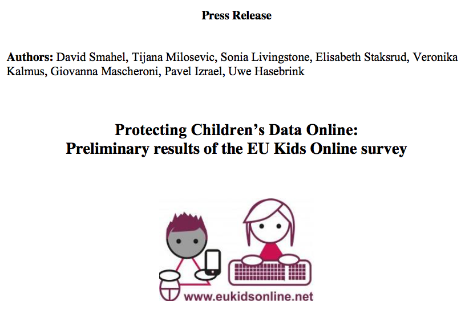 The findings are based on an analysis of data collected from 9-17 year old children in five countries (Estonia, Italy, Norway, Slovakia and the Czech Republic). Survey results from a total of fourteen European countries are also coming out soon.

Spyware and viruses are the most common data protection problem for the surveyed children. While relatively few children report to have lost money by being cheated on the Internet (between 2% and 5%), these numbers have slightly increased when compared to 2010. Between 5% and 10% of the children say they spent too much money on in-app purchases or when playing online games. While a common problem, spyware and viruses, however, seem to be less of an issue now than nine years ago.

In this press release, the focus is only on data protection and e-safety issues for the five countries where the survey analyses have already been completed. The latest (2018) results are compared to the findings from the 2010 project: the European Commission-funded, nationally representative surveys in 25 European countries. Both data collection waves covered a broad range of questions including online engagement, risks and rights.