Even though NORDHOST officially started 1st of February this year, the entire group has not had the pleasure of meeting until now. Our first workshop took place at Holmen Fjordhotell over a couple of days in late August. 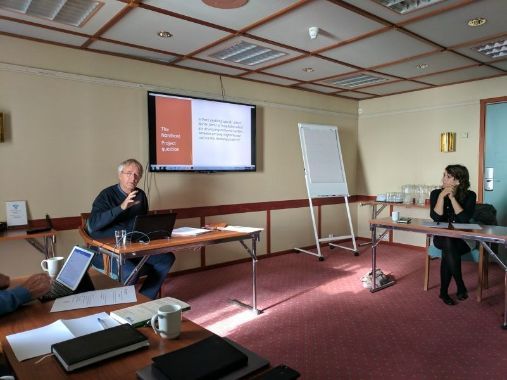 On Wednesday 23rd of August, four of the six researchers who work full-time with Nordhost met to establish a working network. Of these, Dorina Damsa, Helena Schmidt and Kaia Rønsdal are all working at the University of Oslo, while Paula Merikoski is affiliated with the University of Helsinki. The group is still to be completed with one more post doc. fellow from the Department of Social Anthropology, UIO. They were joined by two of the members of the NORDHOST core group, Trygve Wyller and Cathrine Thorleifsson, to discuss their planned research and their connection to the NORDHOST core question; Is there anything specific about Nordic forms of hospitality which are developing in the encounters between arriving migrants and civil society receiving projects?

The majority of the local and international members arrived during the afternoon, and we enjoyed meeting informally for a communal meal.

The real first common workshop for the entire group started on the 24th of August. Trygve Wyller officially opened the workshop, followed by presentations of all group members. The program was organised around familiarising everyone with each other and current research. All members had prepared a short presentation of their NORDHOST research projects, and had been specifically challenged to bring forward the Nordic perspectives. The object of this challenge is to secure and maintain a coherent line of projects relating to the overall aims of the project. Additionally, the core group members had all prepared longer presentations relating to the NORDHOST issues. After one and a half days of presentations and discussions, the overall impression is that despite the interdisciplinarity and diversity of NORDOST the different subprojects are surprisingly concurrent in terms of interests, views and aims, and the most common line of thought was related to different aspects of resistance in relation to and/or opposed to hospitality.

Being the first meeting, the group had a substantial amount of business and planning to attend to.