NORDHOST arranged the group’s first open seminar titled Still a Nordic Welfare State? Religion, Migration, Values at The Faculty of Law, University of Oslo 4th and 5th December, followed by a day and half of NORDHOST business. Six excellent keynote speakers were invited and challenged to reflect on given titles, delivering enlightening talks for plenary discussions. 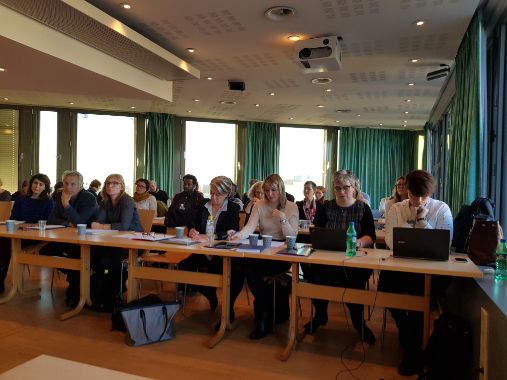 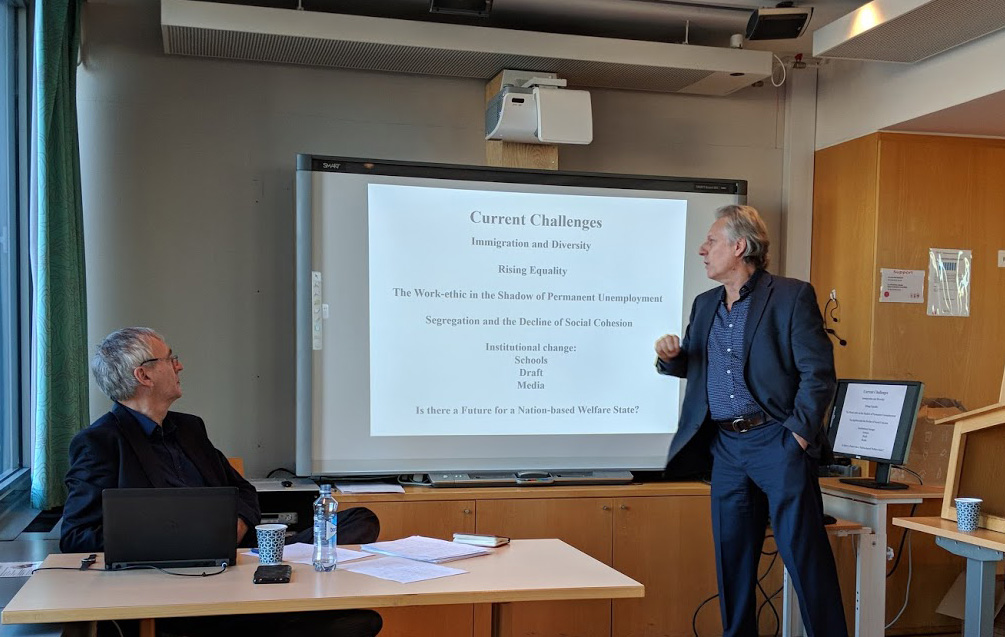 After NORDHOST’s leader, Trygve Wyller, opened the seminar with a warm welcome, the seminar kickstarted with keynote speaker prof. Lars Tragårdh (Ersta Sköndal Bräcke University College, Stockholm), reflecting over the title Critical reflections on the Nordic welfare state in the context of migration.

Trägårdh gave an interesting and elaborate introduction to Swedish attitudes to the concept of ‘being Swedish’ in relation to migration, understandings and senses of trust in the Nordics, setting the context of the ‘Nordics’ and aspects of the ‘Scandinavian welfare state’

The second keynote to contextualise the ‘Nordics’ was prof. Kalle Moene (University of Oslo, Norway), who was challenge to reflect on the topic Does migration challenge or impact the future of the Nordic Welfare state? 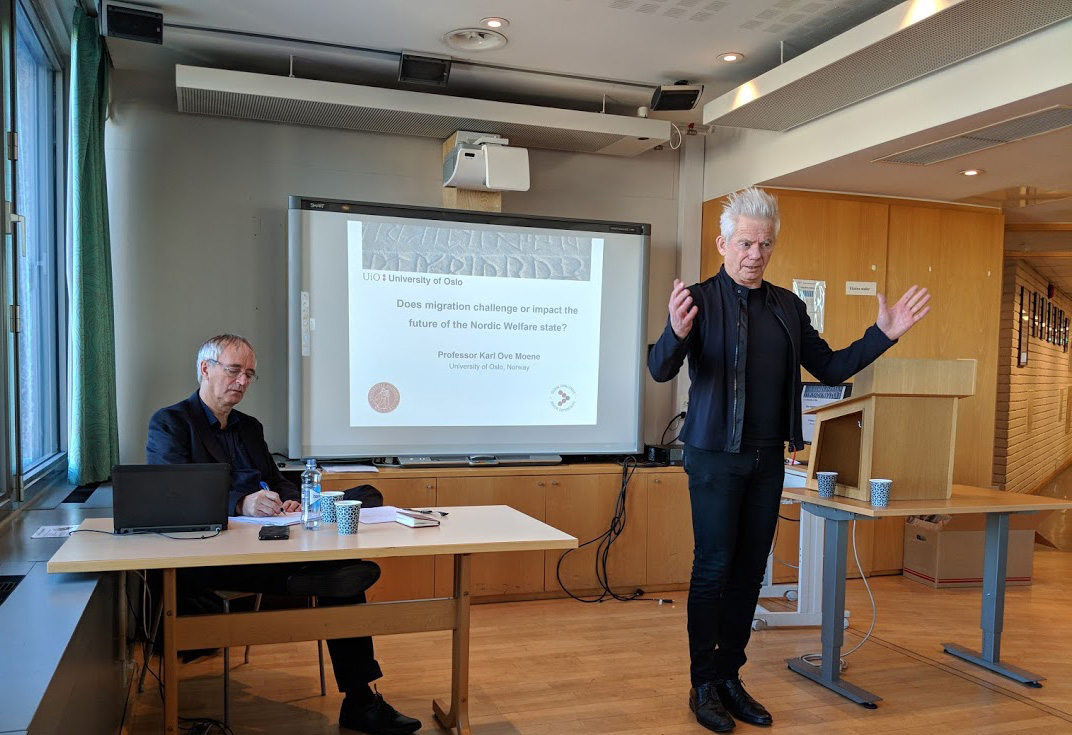 Moene emphasised how there is not one thing driving experiences in Northern European countries. The welfare system is often seen as only good, but it is also vulnerable, as it is centralised, and thus easily occupied. It can be used and even manipulated for different political purposes. Moene pointed out that the idea that the Nordics are under pressure is not at all something new. They always have been – they are wide open to globalised competition!

Moene and Trägårdh together gave substantial contributions for pointing out important features of the Nordic context, giving a solid foundation for framing the four non-Nordic keynotes.

Marie-Bénédicte Dembour from the University of Brighton, United Kingdom was the first to expand the geography, with her title Deporting the challenge – political in/justice in relation to migrant issues.

Dembour gave an enlightening speak, based on cases tried in The European Court of Human Rights, showing how practice tends towards not being very generous towards migrants. It looks like the ECtHR shies away from the issue of migration because of nationality – would it be different 10 years ago? In that case, why has it changed? The historical documents show the migrant (alien) was not to be included for protection in the ECtHR. 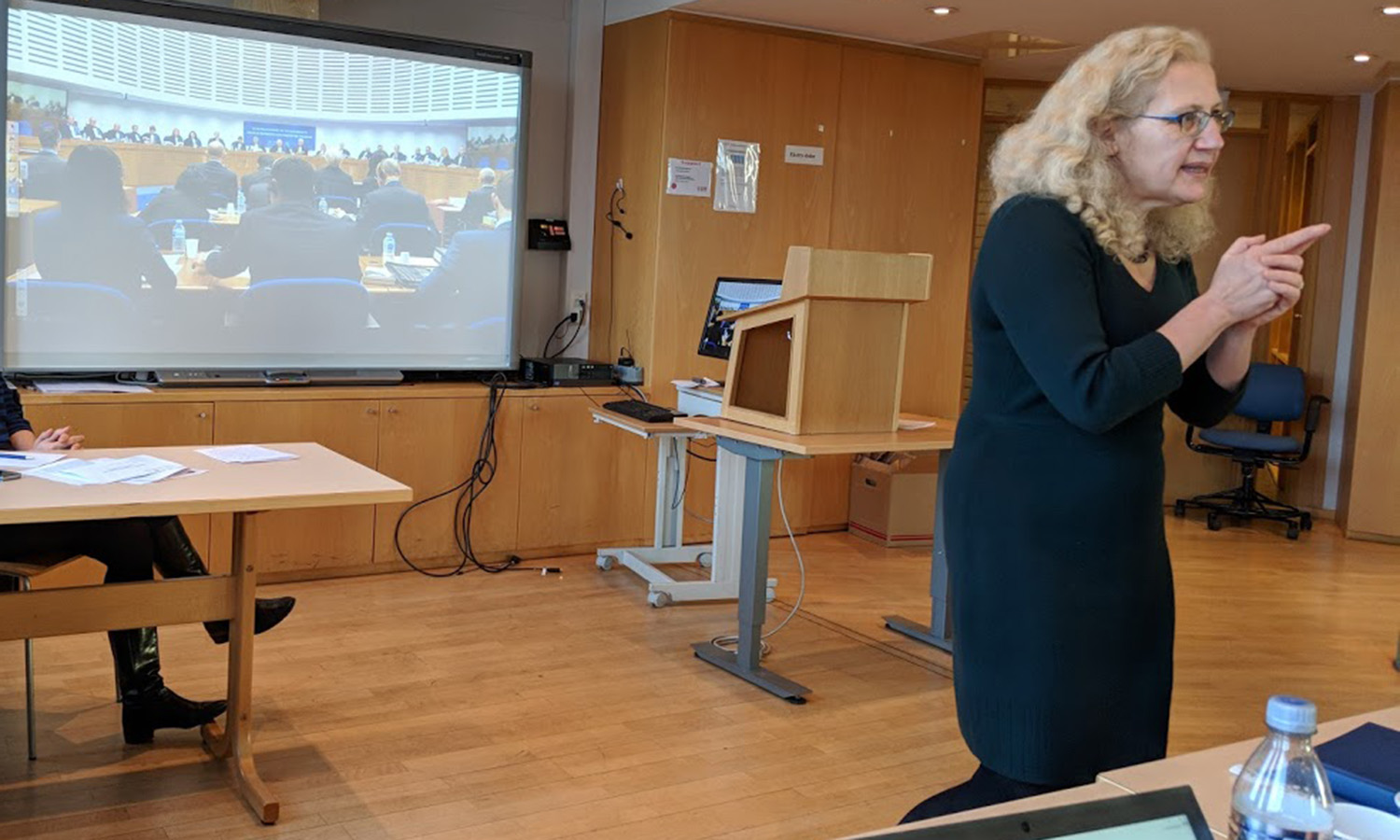 It appears the ECtHR focusses on nationality alone, rather than the big pictures, having no inclination of setting itself in the shoes of the migrants. Apparently, ‘the bastion’ of Human Rights, the one the other courts supposedly look to, has a rather bad record when it comes to migrants.

Dembour was followed by Dr. Deirdre Conlon (University of Leeds, United Kingdom), reflecting on Migration, mobility and the state (in traditional welfare contexts)

Conlon decided to presented a review work in geography, without going into an analysis. She explicitly did not talk about Nordic or hospitality. Rather, she used examples concerning the internal economies of immigration detention, primarily from the US and the UK.

Conlon pointed out how detention is becoming ideal business strategy, with gains for private, non-state and state entities, through the privatisation of asylum housing. This leads to the lines between state and non-state actors is becoming blurred, and thus obscuring accountability. 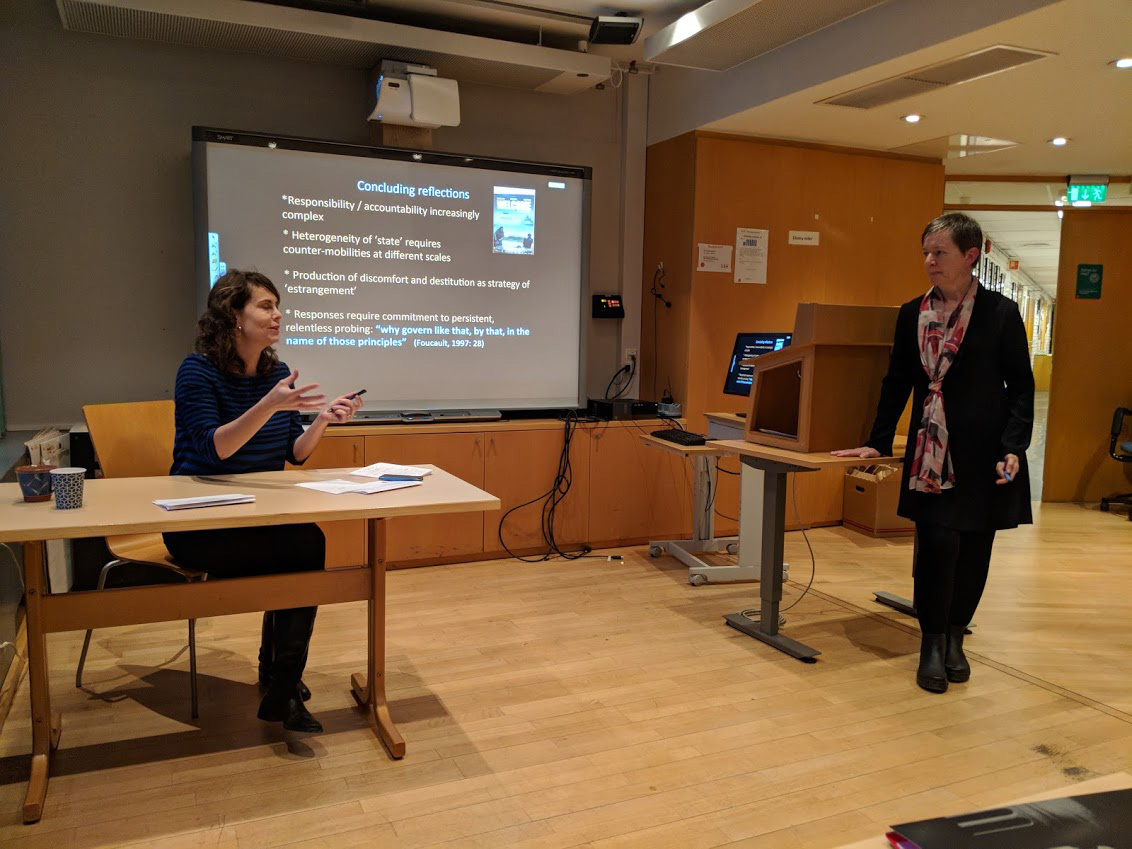 The day was concluded by plenary discussions. The highlights of these were, among many, questions regarding “the public”. It seems to not be the same in Scandinavia and other places. Who are we in the public? One voice? One resource? Or multiple?

Statements from leading politicians normalise a situation where on the one hand policies are increasingly restrictive, whereas on the other it falls on civil society to uphold solidarity and basic human rights. State represents realism and civil society, with all different actors taking care of idealism. This is a dualism that is not threatening to policies, they live comfortably with this tension. Moral is left in the care of other actors, releasing the state of being moral.

Some of the resistance the keynotes spoke about, and that NORDHOST focuses on, comes from places we are not used to theorise. They seem to hold different forms of normativity.

It is not old-fashioned religion returning one more time. We must theorise the embodied “not-NGO-resistance”. What happens when we research that?? The unprominent practices, of migrants themselves?

At the same time we must be careful about romanticising civil society. Critiquing the state is fair game, however we need to remember to turn the guns every once a while.

Settler pointed out that the Nordics as a perceived superpower of Human Rights rather seems a post-racial utopia. The Scandinavian innocence is rather colonial complicity. 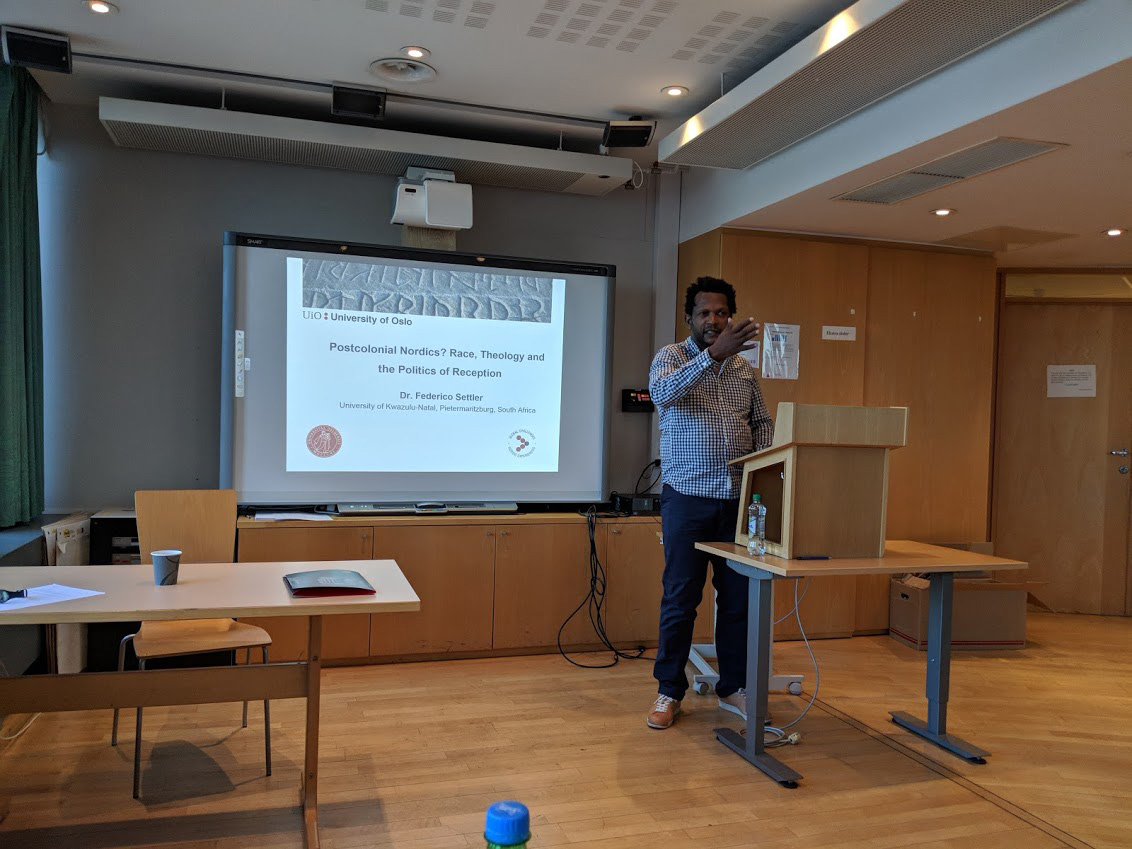 He continued to focus on religious movements aiding migrants. Critically pointing out how the church is in need of victims, as objects for our benevolence. He discussed how liberation theology requires a redeemable subject, required to be domesticated and deracialised and de-sexualised.

He called for recognising race in the stranger. When we recognise race with the other, our whiteness appears. Invisible whiteness becomes visible in superdiversity. Furthermore, faith communities must open to sexuality, politics and race.

The seminar’s last keynote speaker was Dr. Erin Wilson (University of Groningen, The Netherlands), addressing Problematic assumptions in debates about religion and migration.

Wilson pointed out and elaborated on the entanglement of refugees, religion and violence. Refugees are conceptualised through religion, where Islam is the elephant in the room. The perception is: Refugee = Muslim, Muslim = terrorist. Based on Western, secular ideas of religion and religion’s connection to politics. Furthermore, it becomes a question of good religion or bad religion. Categories of secularism and religion are developed, and are applied to migrants, making good and bad refugees.

Wilson pointed to the ideas of refugee versus migrant, of finding categories to determine whether someone is “in need” or not. The distinction on ground is meaningless – identities are complex, cannot be reduced to “refugee” or “not refugee”. 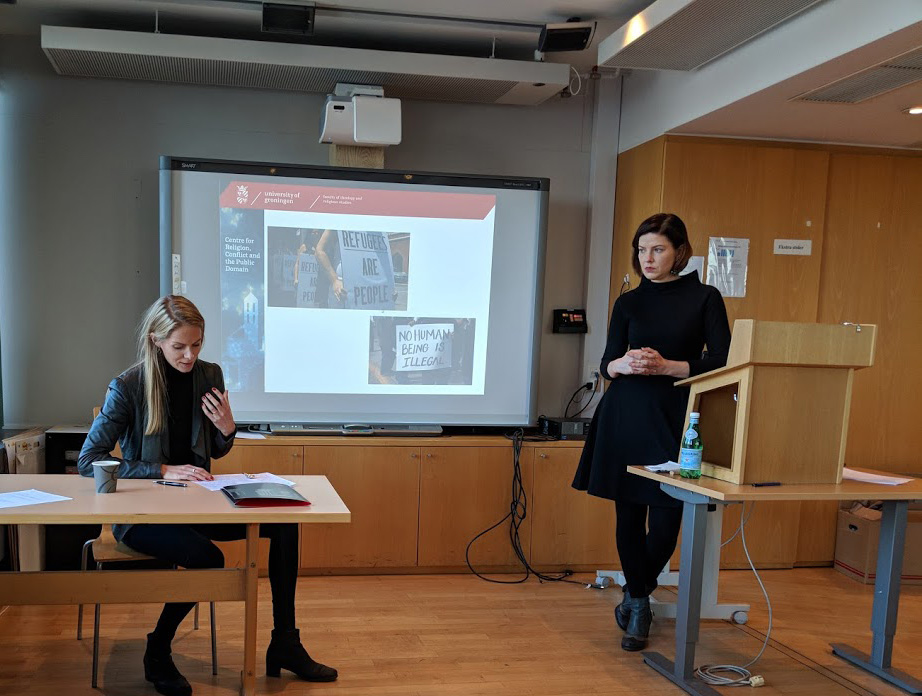 She calls for scholars to delink refugees and Islam. We must keep ourselves and others well-informed, and furthermore engage in public.

Either we are prepared to see people on the move as the same as us, or not – must be prepared to deal with the consequences of the answer to that question.

The following, concluding plenary discussion touched a range of topics.

One was the “something more” beyond the secular/religious binary, and how some religious communities, even the Vatican are blurring the secular and religious, especially in the question of migration.

We must be attentive to language – speak of people, not ‘refugees’ – people on the move

The keynote speakers represented a wide range of disciplines, reflecting the interdisciplinarity of NORDHOST. At the same time, through their presentations, their focus, examples or native home gave great geographical range – an additional and almost unforeseen bonus to the conversations.