Call for papers - Conceptualizing the World

As a starting point for this conference we want to suggest an alternative approach to the concept and the discourse of “globalization”. Irrespective of both normative issues and conflicting temporal scales we take globalization to mean the emergence, appearance and/or production of the world as an object of human experience and practice. The aim of the conference is to study how different sets of concepts, representations and methodologies, within different languages, disciplines, discourses or cultures, react and contribute to this emergence.

In contrast to “globalization”, which tends to point at an endless process, both in time and in space, in symmetry with other older concepts such as “progress” or “modernization”, the concept “world”, and even more “globe” or “earth” refer to something limited, finite and absolute. One of the paradoxes to be explored by this conference is how the complex, heterogeneous and infinite dynamics of globalization gives rise to the idea and reality of a limited, finite – and thus vulnerable – world.

In a dissertation from 1770 Kant defines the world as “the whole, which is not a part”. This totalitas absoluta enjoys “an ordinary and harmless comprehensibility”, he claims, as long as it remains within the borders of ordinary language, but is a “cross” for the philosophers. In the same year James Cook discovered and charted the Eastern coastline of Terra Australis Incognita, thus filling in one of the last blank spots in Western cartography and at the same time laying the world open for centuries of exploitation at the hands of merchants, politicians and adventurers. Both events, though very different in scope, made the world emerge as something finite and limited, but at the same time served as starting points for the infinite dynamics of globalization

This conference aims to study the emergence of the world in discourse, and its confrontation with different empirical and historical realities, both diachronically, across the centuries, and synchronically, across different cultures, languages and discourses. On a general level there will be three main areas of investigation:

However, these three areas of investigation should be taken as suggestions and as sources of inspiration, not as straightjackets. It should not be the goal of the sessions at this conference to remain within the boundaries of any one of these areas – neither should it be the goal of the various papers making up these sessions. On the contrary, we will strive at organizing sessions which include perspectives from all areas of investigation.

One common interest of all these sessions should be to explore how a discursive, cultural and/or historical contextualization of concepts, representations, methodologies, practices and institutions dealing with the world could help us in understanding their social and political implications – at a moment in history when there is a ever-growing conflict between unlimited and infinite globalization and a limited and finite world. 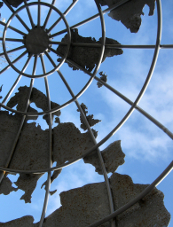