This second publication in the Kultrans series by Berghan Books has been edited by Karen Gammelgaard and Eirik Holmøyvik and is an outcome of the research area "Foundational Texts". 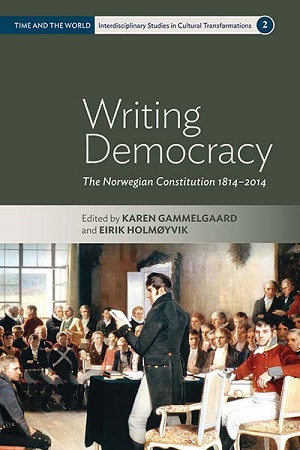 The Norwegian Constitution is the oldest functioning constitution in Europe. Its bicentenary in 2014 has inspired the analyses in this volume, where contributors focus on the Constitution as a text to explore new ways of analyzing democratic development.

This volume examines the framing of the Norwegian Constitution, its transformations, and its interpretations during the last two centuries. The textual focus enables new understandings of the framers’ negotiations and decisions on a democratic micro level and opens new international and historical contexts to understanding the Norwegian Constitution.

By synthesizing knowledge from different realms – law, social sciences, and the humanities – Writing Democracy provides a model for examining the distinct textual qualities of constitutional documents.

Introduction: The Norwegian Constitution as a text

PART I: EMBARKING ON THE MATTER

Chapter 3. The many textual identities of constitutions
Dag Michalsen

Chapter 4. The Norwegian Constitution and the Rhetoric of Political Poetry
Ulrich Schmid

Chapter 5. Constitution as a Transnational Genre: Norway 1814 and the Habsburg Empire 1848–1849
Karen Gammelgaard

Chapter 8. The Norwegian Constitution and its multiple codes: Expressions of historical and political change
Inger-Johanne Sand

Chapter 11. To speak what the hour demands: Framing the future of public speech at Eidsvold in 1814
Mona Ringvej

Time is moving faster; the world is getting smaller. Behind these popular slogans are actual cultural processes, on global and local scales, that require investigation. Time and the World draws on research in a wide range of fields, such as cultural history, anthropology, sociology, literary studies, sociolinguistics, and law, and sets out to discuss different cultures as sites of transformation in a global context. The series offers interdisciplinary analyses of cultural aspects of globalization in various historical and geographical contexts, across time and space.