Higher education needs to be further up the development agenda

How do you build a good health system without doctors? Or a competent judicial system without lawyers? How do you combat climate change without biologists? Higher education is crucial to create sustainable societies; however, this is not clearly reflected in the international development agenda.

This Op-ed was first published in Times Higher Education in connection with the High Level Political Forum at the UN in New York in July. The authors were a part of the Norwegian delegation. 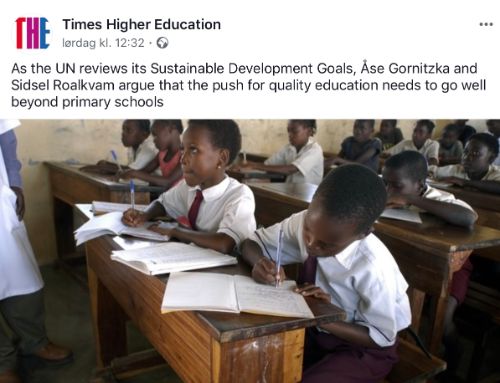 This week, politicians and other decision-makers are meeting at the United Nations High Level Political Forum in New York to follow up on its Sustainable Development Goals. This year, Goal 4, “Quality Education”, is one of those up for review. The National Committee for Sustainability in Norway’s university and college sector is joining the Norwegian delegation.

To address the major societal challenges we face, we need a whole-sector approach to education, from primary school to college and university. The importance of high-quality higher education is gradually being acknowledged. In the Global North, building a higher education system has been a key driver in economic and social development.

But today, the return on individuals’ investment in higher education is significantly higher in the Global South than in developed countries, and, according to the World Bank, is highest in Africa (21 per cent in 2015). This, in itself, is a good argument for prioritising higher education in the development agenda.

However, the broader societal effects go far beyond what the individual receives from a degree. Many countries in the Global South have a great need for professionals who can develop strong disciplines in their own local context, so that knowledge can be put to good use. As a recent article in Nature by our colleagues illustrates, developing science in Africa will strengthen research as a whole. As African scientists increasingly join the global scientific community, we will have access to different ideas born of different challenges and experiences.

Historically, aid support to Africa was largely focused on primary and lower secondary schools. Little thought was put into what awaited learners at the other end; universities and colleges have been valued primarily for their role in educating teachers; otherwise, they have been seen largely as a luxury good for a small elite.

But the proportion of young people who qualify for higher education will double or triple over the next few years; in order to reap the benefits, clear priorities should now be set in aid and development policy to broaden support across the whole education system. If knowledge production in the Global South is to accelerate, we must contribute to developing strong universities and colleges there.

Networks of research-oriented African universities are now funding centres of excellence to pool their research resources in important areas such as climate, energy and social inequality. Africa’s leaders have adopted the African Union’s Agenda 2063, with concrete ambitions to build up research-intensive universities, diverse higher education systems and regional education and research collaboration. They see that the region needs to invest in knowledge to build strong knowledge communities.

Norway has already taken steps to respond. Its programme for capacity development in higher education and research (NORHED) builds partnerships between higher education institutions in Norway and those in lower- and middle-income countries. Such collaboration contributes to capacity building and mutual knowledge exchange.

The challenge now is to better integrate NORHED into Norway’s policy on higher education, and to give its national research council a more central role in the further development of research cooperation between Norway and countries in the south.

In Brussels, the European Union has signalled its commitment to a partnership with the African Union. Leaders on both continents have grasped the scale at which global challenges need to be tackled. Now they must recognise that to address climate change and inequality, for example, research and education must be key features of this partnership.

Without people who understand the complexity of the global challenges we face and can apply it in their working lives, few, if any, Sustainable Development Goals can be realised.