In defence of universities as truth-seeking institutions

The original Magna Charter Universitatum was fuelled by concerns over ‘economisation’ of higher education. The new one now being debated needs to address with clarity the need for university autonomy and academic freedom in times when political extremism, populism and nationalism are on the rise. First published in University World News 26 October. 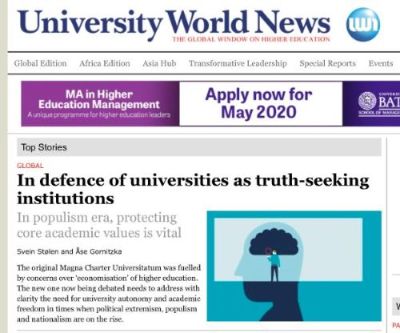 A focus on core academic values must be the bedrock of global universities’ strategies for the coming decade. By 2030, 10 years of new world citizens will have graduated from our universities. By 2030 new frontiers of science will have been opened up by our researchers. By 2030 our efforts will have contributed to the protection of the global climate and the world’s sustainability. This is our academic responsibility. A responsibility that builds on academic freedom.

Scientific freedom and institutional autonomy are necessary conditions for us to be able to fulfil our mission and pact with society. Yet we know that core academic values cannot be taken for granted: they need to be nurtured, actively pursued and defended.

We see quite blatant examples in several countries of how universities’ room to manoeuvre is being overtly challenged by governments’ direct interventions in academic matters. More insidious threats to academic values come from societal trends that promote anti-intellectualism and question scientific knowledge in new ways.

More than ever, it is important that researchers keep their integrity and are allowed to ask questions, publish their results and have a voice in the public sphere.

Practising, nurturing and defending academic values takes place every day at the university: in seminar rooms, in labs and when writing papers and presenting them for the critical scrutiny of peers. It happens in interactions with society, politics and business. It also takes place in arenas for collective action on the European and global levels.

It is vital that we use strong international collaboration to secure and strengthen core academic values such as academic freedom, institutional autonomy, social responsibility, equitable access and accountability.

To this end, Norway’s University of Oslo is engaged in a number of networks and initiatives to promote these values and support colleagues who are at risk because of their academic activities or solely for being academics. Practising academic values is a global collective endeavour.

The University of Oslo signed the Magna Charta Universitatum in 1988, a declaration stating the core values of the university. The declaration has been signed by 906 universities worldwide and states clearly that universities must be autonomous, academics must have academic freedom and research and education must be interlinked. This document has become an unofficial constitution for the “academic republic”.

This year, a new edition of the Magna Charta Universitatum (MCU) has been proposed to update it in line with the current situation and was discussed at a meeting in Canada in October. The process will continue until a final decision is made at the governing council of the Magna Charta Observatory in 2020. This will be an important conversation about academic values in a changing world.

More than ever, we see the need for a strong and explicit MCU. We understand the need to review it and to soften the direct references to Europe. The declaration must be more inclusive, but that should not entail a weakening of the MCU as a statement of our common university values. Rather the opposite, we would argue.

The draft of the new MCU reflects the changes we have seen in society over recent decades, but we believe it does not state with sufficient clarity the need for university autonomy and academic freedom in times when political extremism, populism and nationalism are on the rise and the will to restrict freedom of speech is strong.

The 1988 declaration was fuelled by a concern for growing ‘economisation’ of universities – this is still a highly relevant concern. Yet, with the experiences of the past three decades, it is clearly necessary to highlight the implications of changing political conditions for the universities’ mission, basic values and role in society.

We urge the review group to be consistent in distinguishing between institutional autonomy and academic freedom. We find that the recent declaration from the Global Forum on Academic Freedom, Institutional Autonomy and the Future of Democracy, resulting from a conference at the European Council in Strasbourg in June, constitutes an excellent basis for this.

A voice for students

Furthermore, we feel that students are important members of academia and society and student participation in higher education decision-making processes should be mentioned explicitly. The new MCU 2.0 should continue to stress the need to educate students as democratic citizens as well as a reference to the need for students’ freedoms to be safeguarded, as stated in the original version.

We would also like to see more emphasis on research ethics. For instance, in the section on research integrity (item 15), we would like to see the following addition (in italics): “Universities embrace their duty to teach and undertake research with integrity, producing reliable and trustworthy results, following ethical principles and showing respect for those who participate in research.»

In addition, it would be good to see a mention – in the new item 18 on unequal access to knowledge and influence – of the need for universities to promote human rights and show solidarity across the global academic community.

In conclusion, universities should sharpen their emphasis on institutional autonomy and academic freedom, not weaken it to please our new stakeholders.

We need an MCU that underlines the long-term perspective universities, as value carriers, must take. Universities still need to provide society with knowledge and offer critical questions for better decision-making and for addressing the big challenges of our times.

Now, more than ever, it is important that universities nurture and defend their role as critical and truth-seeking institutions and that they act with integrity.