Core academic values are the bedrock of the new UiO strategy - currently being written - for the coming decade. By 2030 yet another 70 000 students will have graduated from UiO. By 2030 new frontiers of science have been opened up by our researchers through cooperation with our partners. By 2030 our efforts have contributed to the protection of the global climate and the world’s sustainability. This is our academic responsibility. A responsibility that builds on academic freedom. 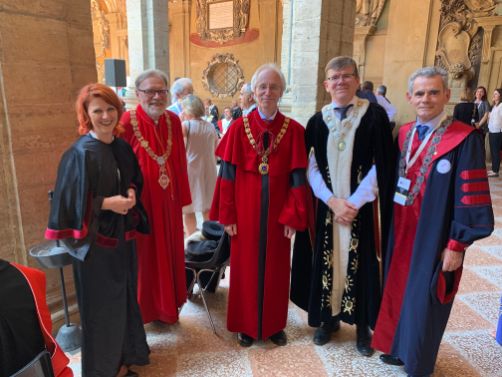 Scientific freedom and institutional autonomy are necessary conditions for us to be able to fulfill our mission and pact with society. Yet we know that core academic values cannot be taken for granted but need to be nurtured, actively pursued and defended. We see quite blatant examples in several countries of how the universities’ room to maneuver is being overtly challenged by governments’ direct interventions in academic matters. More insidious threats to academic values come from societal trends that promote anti-intellectualism and questions scientific knowledge in new ways. More than ever, it is important that researchers keep their integrity and are allowed to ask questions and publish their results and to have a voice in the public sphere.

Practicing, nurturing and defending academic values takes place every day at the university; in the seminar rooms, in the labs, when writing papers and  presenting them to the critical scrutiny of your peers. It happens in the interaction with society, politics and with business. It also takes place in arenas for collective action on the European and global levels. It is of the essence to use strong international collaboration to secure and strengthen core academic values such as academic freedom, institutional autonomy, social responsibility, equitable access and accountability. Therefore, the University of Oslo is engaged in a number of networks and initiatives to promote these values and also support colleagues who are at risk because of their academic activities or solely for being academics. Practicing academic values is a global collective endeavor.

UiO signed the Magna Charta Universitatum in 1988, a declaration stating core values of the university. The declaration has been signed by around 900 universities worldwide and states clearly that universities must be autonomous, academics must have academic freedom and research and education must be interlinked. This document has become somewhat of an unofficial constitution for the “academic republic”. This year, an amendment to the Magna Charta Universitatum is proposed, to update it to the current situation. Over the next couple of days this will be discussed at the general assembly of the Magna Charta Observatory. This will be an important conversation about academic values in a changing world. We should sharpen the emphasis on institutional autonomy and academic freedom, not weaken it to please new stakeholders. We need a long term perspective. The universities still need to provide society with knowledge and critical questions for better decision making and addressing grand challenges. Now more than ever it is important that universities act in their role as critical and truth seeking institutions with academics that act with integrity.

This also entails taking an active role in defense of academics and academic values globally. Over the last three years, the University of Oslo has coordinated an Erasmus+ strategic partnership called Academic Refuge, in cooperation with Scholars at Risk, the UNICA network and the University of Ljubljana. The project promotes academic core values in all higher education institutions and support refugees and researchers who are at risk of being silenced or persecuted because they ask critical questions or publish inconvenient results. The project has produced training material for staff training workshops, a handbook on Promoting core higher education values and a massive open online course (MOOC) called Dangerous Questions: Why Academic Freedom Matters. The MOOC will run again from 28 Oct.

Pursuit of academic values through global collaboration is needed. Over the last year the Scholars at Risk network, where UiO is a member, received 580 applications for assistance and successfully placed 115 scholars at universities globally. The highest rate of applications came from Turkey, Syria, Iran and Yemen. Over 1,000 applications have been received from Turkey alone since January 2016. UiO is currently hosting four scholars yearly.

Tomorrow we host a kick-off meeting for another EU-project together with Scholars at Risk Europe and other European partners. The InSPIREurope project is in fact a network of university networks, funding schemes and universities. The aim is to improve the coordination of efforts in support of researchers at risk. The project will coordinate training and sharing of best practices among various stakeholders, relevant for the researchers at risk to succeed in Europe and hopefully contribute to their home societies.

InSPIREurope takes as its starting point that excellence in research depends upon open scientific debate, and is driven by a multiplicity of ideas, people and perspectives. This need for diversity, as well as the importance of global engagement will be reflected in UiO’s Strategy2030.

The defense and interpretation of academic values must be an everyday and continuous pursuit.