The Hope of 1989: How the fall of the Berlin Wall transformed world politics

Thirty years after the fall of the Berlin Wall, the hope of the revolutionaries of 1989 for a better world does not appear to have materialised. But that should not take away the extraordinary courage of those who took to the streets in the autumn of 1989, writes Jan Palmowski, Professor of Modern History in the School of Modern Languages and Cultures at the University of Warwick. 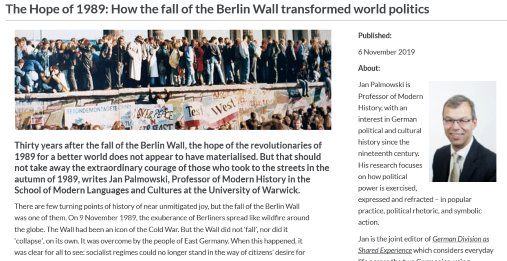 Faksimile fra The University of Warwick.

There are few turning points of history of near unmitigated joy, but the fall of the Berlin Wall was one of them. On 9 November 1989, the exuberance of Berliners spread like wildfire around the globe. The Wall had been an icon of the Cold War. But the Wall did not ‘fall’, nor did it ‘collapse’, on its own. It was overcome by the people of East Germany. When this happened, it was clear for all to see: socialist regimes could no longer stand in the way of citizens’ desire for democracy and human rights.

Thirty years later, populists govern in many parts of Eastern Europe, as oligarchs have created new economic (and political) dependencies. Even in eastern Germany, support for the anti-immigrant, climate-change denying far-right ‘Alternative for Germany’ (AfD) is at an all-time high, at over 20% of popular support in recent state elections. What has gone wrong? How could such deep-seated disillusionment with democracy emerge, in just a few decades?

If, in 1989, capitalism appeared to be victorious, its superiority is hardly a given thirty years later, least of all in Eastern Europe. To be sure, there has been huge economic progress after socialism. But vast areas have been left behind by a vicious circle of loss of jobs, depopulation, and a decline in services. But this phenomenon did not start in 1989. In fact, a key factor in the collapse of communism was the growing technological gap between socialist countries dominated by heavy industry worse for wear, and a West boosted by rapidly developing computing power and a fast-changing, globalising banking and services sector. 1989 marked the first public protest about regions and socialist countries increasingly left behind, just on a massive, transnational scale.

Hopes for a new system were dashed

Most Berliners were joyous in 1989 – but not all. Those who had fought for socialism could see their world crumbling as Berliners hacked the Wall into pieces. Even a number of environmental activists and demonstrators feared – rightly, as it turned out – that their dreams of a new society that was neither socialist nor capitalist would be dashed by the lure of unification. The problem was not that there was an alternative to speedy unification. Already from as early as the summer of 1989, thousands of East Germans voted with their feet every month and left for West Germany: this haemorrhage of talent alone dictated rapid unification. Rather, the problem was that the optimism of 1989 drowned out those who warned how difficult the transition to capitalism would be. The maelstrom of transition caught East Germans unprepared, and this transition was completely one-sided: West Germans cared little about how they might in fact learn from the East. The experiences and memories of millions of East Germans became discounted, resurfacing only occasionally in wider consciousness, in films like ‘Goodbye Lenin’ and the ‘Lives of Others’.

The Wall was overcome peacefully

But none of this should take away from the significance of 9 November, which has shaped the past thirty years in significant ways. First, and above all, the Berlin Wall was overcome peacefully. This was far from a foregone conclusion. The GDR was one of the World’s most militarized states, and it had the largest security apparatus (per capita) worldwide. In theory it had the means at least to try and quell the revolution, and some had the will to follow the Chinese example of Tiananmen Square of June 1989. Instead, East Germans made a peaceful revolution that shook the world. Precisely because so much of their experience during socialism has since been discounted, it is important to honour the courage of the protesters, and the wisdom of crucial decision-makers.

1989 is also a moment that transformed Europe. West German leaders were acutely aware of the nervousness in London, Paris, Washington and Moscow about a resurgent, united Germany. When West German politicians addressed the East German crowds in the days following the overcoming of the Wall, none of them wasted an opportunity to emphasize that the German future lay within a shared European home. The European Union, founded in 1992, is a direct consequence, with Germans willingly (and begrudgingly) giving up the DM, their prized currency, for the common Euro. The EU is the final legacy of a generation marked by the Second World War, to create a Europe that is so intertwined and united that War could never again emanate from German soil.

The demise of the Cold War

Finally, the Wall’s demise marked a rapid end of the Cold War. Thirty years on, it is easy to develop a nostalgia for the bipolar global order established between the US and the USSR. But this apparent stability was built on a massive nuclear arsenal around the world. It propped up countless corrupt, dictatorial regimes in Africa, the Americas, and Asia, irrespective of the suffering endured by their exploited citizens, as long as these regimes were suppliant to one or the other superpower. This global, nuclear confrontation imploded quickly, and with little noise. Once protesters had overcome the Wall as the visible demarcation between East and West, cold-war division was defenceless.

Thirty years on, the hope of the revolutionaries of 1989 for a better world does not appear to have materialised. But that should not take away the extraordinary courage of those who took to the streets in the autumn of 1989. Nor should it cause us to forget the extraordinary news of 9 November 1989, when the Wall was overcome. At that moment, everything seemed possible. Ordinary citizens could make history – and they still can.

This article was originally published by Warwick University.