Dedication to purpose through 75 years

Looking back at The International Summer School (ISS) on its 75th anniversary, we find that it has served as a central tool for the internationalisation efforts at the University of Oslo through its many decades. 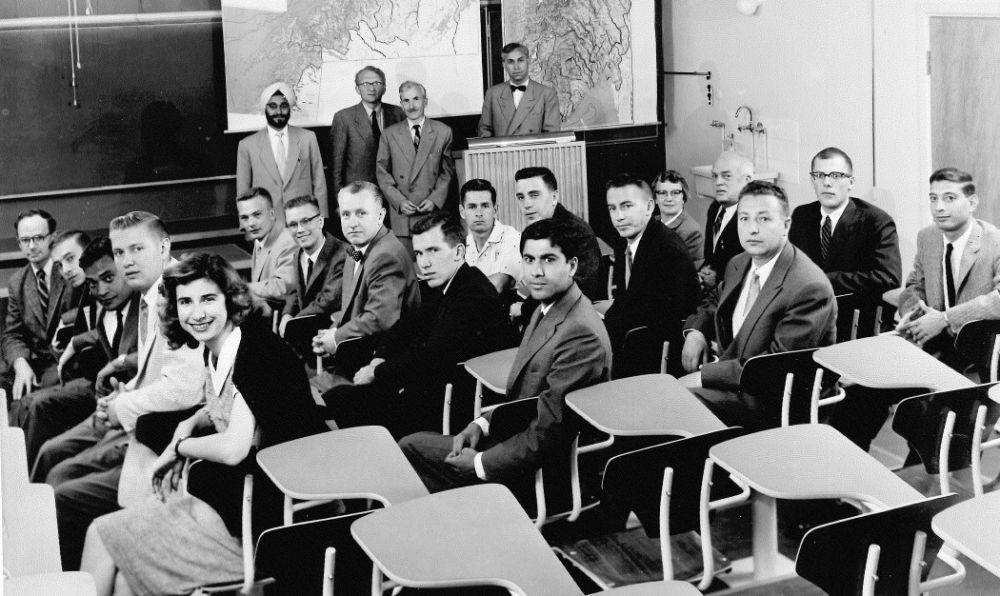 “Industries of Norway” class of 1958 – a course established as a collaboration between ISS and the Norwegian School of Economics and Business Administration.

In the midst of a global pandemic, the ISS has reached a milestone representing an unbroken chain of 75 consecutive summer sessions. It has proven itself to be a constant agent of unification that does not cease, even in times of duress, to bring people together from all over the world.

This year, 615 students from 87 countries will attend the 75th session of the ISS.

In 2011, the University of Oslo celebrated its 200th anniversary, under the anniversary motto Et nos petimus astra…, which is Latin for “We too seek the stars”. The motto for Oslo Municipality is “Unanimiter et constanter”, meaning “United and constant”. It is in the space between these two mottos that the ISS finds its place, which is quite befitting an institution so firmly placed at UiO as well as playing a role in promoting Norway’s capital city for more than 7 decades.

Not only does the ISS stand solidly bridging across borders; it does so with purpose. The ISS reaches for the stars in its efforts to work for peace, justice, international cooperation and dialogue, an aim that may seem out of reach, but nonetheless one worth striving for and important that we do, and do together.

The global ripples of the ISS

There are numerous examples of achievements around the world where the ISS and UiO have hopefully also played a role. Two long-standing directors at the ISS, Kjetil Flatin and Einar Vannebo, have in a webinar series to promote ISS’ 75th jubilee highlighted several of the ISS alumni who today hold prominent positions.

Chakufwa Chihana spent 7 years in solitary confinement during the despot Banda´s regime in Malawi, and later became the nation’s Minister of Culture. Another ISS alumnus, Narendra Taneja, is currently spokesperson for the Prime Minister of India. Other examples, recently mentioned in Norwegian media, are Lithuanian Supreme Court judge Egidijus Kuris who attended the ISS as part of UiO’s newly established Eastern European program in 1990, along with Einars Semanis, Latvia´s recent ambassador in Belarus. The current president of Austria and representative of the Austrian Green Party, Alexander Van der Bellen, is an ISS alumnus from 1970.

Perhaps more importantly, one does not need to hold highly esteemed positions in national or international governance to be an agent of civic engagement and a force for a better world. Since 1947 until today, more than 30,000 students from approximately 160 countries have attended the ISS, many who continue to supplement actions both at government, academic and grassroots levels.

The stories of the ISS are many and varied, but it is clear that our alumni continue to concern themselves with peace, justice and sustainability around the world in different ways. Many of the ISS alumni have also spoken publicly about the importance of their time at the ISS, for which we are very grateful.

In the cold war period of the 60s, 70s, and 80s, it meant a great deal for many students to befriend people across the divide between communist and capitalist countries, particularly across the Eastern and Western European ideological divide. The ISS also then purposefully included topics of global relevance in the academic program, and were able to attract the most outstanding national experts to teach, such as the Norwegian foreign minister, the head of the Norwegian National Bank, Nobel Peace Prize winners and other internationally recognised specialists. These teachers came back year after year because they loved challenging a cross-section of multicultural young enthusiasts.

Pulling on the resources located in Norway, renowned research centres and directorates, such as the Peace Research Institute in Oslo, the Norwegian Directorate of Health Services, the Norwegian School of Economics and Business Administration and the Norwegian Institute of International Affairs assumed leadership of ISS courses in their respective fields of expertise. The Norwegian Foreign Affairs Office offered the ISS as a way for its local employees around the world to learn about Norwegian culture and language, and promote Norwegian language abroad. These methods all led to interpersonal relations between Norwegian officials, centres and active students globally, some of whom would later become leaders and specialists in their own countries.

In the1990s, the ISS was engaged in projects addressed at students from particular conflict areas. In the wake of Norway’s role in the peace process in the Middle East, which resulted in the Oslo Accords between Israel and the Palestinians, the ISS launched the Shalom-Salaam program for an equal number of Israeli and Palestinian students in 1994. This program was run in cooperation with the Norwegian Ministry of Foreign Affairs and several Rotary clubs in Oslo. Israeli and Palestinian students shared rooms, there were bridge building sessions and weekend homestays in pairs with Rotary families. Each year when selecting a new group of students, Shalom-Salaam alumni reunions were held in the region.

Another similar project in cooperation with the Norwegian Foreign Ministry for students from former Yugoslavia and the Caucasus region was sponsored by Norwegian non-governmental organisations, Rotary, and the Nansen Academy at Lillehammer. In these programs, the foundational values of the ISS come very clearly to the fore: It is only by letting suffering speak that we can begin to think about peace.

ISS as a forerunner

Internationalisation, which is increasingly important for academia and knowledge production today—and a necessary condition for tackling global issues—began in many ways at UiO with the ISS. Long before internationalisation became a prioritised goal permeating the entire institution, the ISS brought thousands of students from all over the world to our university.

It is important to note, however, that a summer school does not become internationalised just by admitting students from across the world. A holistic approach to international education must acknowledge that learning happens as much outside as inside the classrooms, and must be as experiential as theoretical. International education involves work to facilitate and encourage intercultural engagement, while remaining mindful of the power dynamics at play in such meetings. The ISS combines academic analysis with interpersonal contact to develop insight, understanding and empathy.

We salute all the students, faculty, staff and partners who through the years have upheld the ISS’ ideals and dedication to purpose! It is with great pride that we announce the opening of the 75th summer session of the International Summer School at the University of Oslo.