This week's Food & Paper will be given by Cagri Erdem from RITMO on performing music with machines. 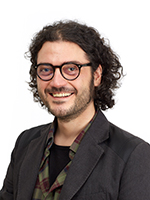 “The music made with machines is not real” is what most teachers told us when I was studying in the state conservatory high school. Later, I realized this was not complete nonsense because, in their thinking, machines were stealing our roles as musicians. Imagine playing the guitar; for example, we are 100% sure that it is the player who makes the sound. The guitar abides laws of physics, and it is certainly not made to surprise the skilled user. In other words, the player should own the entire creative process.

What about when musical machines are included? Add an electronics effects stompbox pedal in the guitar-scenario above. Then another, then another, and then a computer: Now, who makes the sound and how? In this talk, I will present some of my work in designing and performing music with machines, focusing on how I used artificial intelligence tools for interactive purposes, and what musical machines can afford in terms of control differently from traditional acoustic instruments. Then, I would like to raise two questions for discussion:

Çağrı Erdem is a performer, music technologist and researcher specializing in improvised electroacoustic music and musical human-computer interaction. With an overarching question of how it would be possible for humans and machines to share agency in performing music, his Master's degree focused on developing new musical interfaces to extract body movements in the form of biosignals. As a PhD fellow at RITMO, he expands his research on human-machine interactions for music performance, focusing on embodied cognitive approaches to developing and performing with artificial musical intelligence.