Not moving to dance music is near impossible, according to new research. 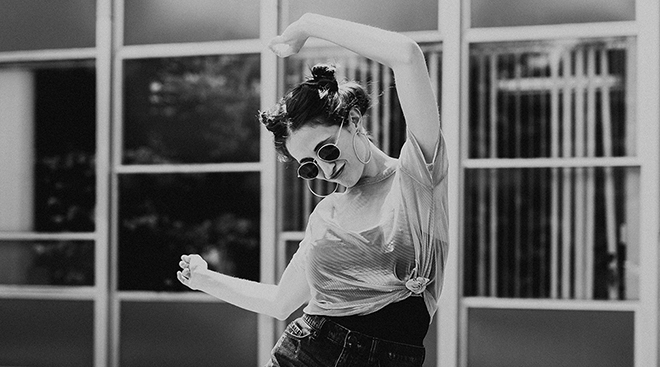 Unconsciously tapping our feet to music is a well-known phenomenon, but research now shows that people will start moving to music even when they’re really trying to stand still. Photo: Brooke Cagle/Unsplash.

Nodding your head to a beat, or swaying along with the music, can feel as though it is happening automatically when a song comes flowing out of the loudspeakers. But have you tried to resist? Researchers have discovered that it is virtually impossible to stand completely still when hearing music.

“Nobody has managed it so far,” says Alexander Refsum Jensenius. Jensenius is a Professor of Music Technology, conducting research on human micro-movements along with Victor Evaristo Gonzalez Sanchez, Postdoctoral Fellow in Biomechanics, and Agata Zelechowska, Doctoral Research Fellow in Music Psychology.

How we move to music when dancing has been of interest to researchers for some time. The tiny, involuntary movements our bodies make to music when we are really standing still however, has never been systematically explored. Until now.

“We have been looking at how music affects us. How still can we actually stand, and what happens when we try hard to stand completely still?” asks Jensenius.

The researchers have studied this by conducting various experiments. They have even organised a series of Norwegian Championships of Standstill, where the winners were the ones who moved the least. After holding four such Championships the results were clear: People generally move a bit more when they hear music.

“It turns out that people stand still in very similar ways. On average you sway your head 7 millimeters per second when you’re trying to stand still. There are also very few variations, with the standard deviation being just a few millimetres,” says Jensenius.

The Norwegian record belongs to the participant who only swayed 3.9 millimeters per second.

“It is fascinating to see that the results are so similar, and that gender, height and age do not appear to affect the outcome. Everyone also stands still very consistently. You might think that we would get tired and start to move more after a while, or vice versa, but it’s completely linear.”

Dance music causes the most movement

What sort of music you put on, determines the level of standstill you can achieve. The researchers tested different types of music, and found that music created specifically for dancing clearly had the greatest impact.

“Unconsciously tapping our feet to music is a well-known phenomenon, but we are probably the first ones to show that people will start moving to music even when they’re really trying to stand still,” says Jensenius.

Electronic dance music, also known as EDM, appears to have the greatest impact on micro-movements, and the researchers therefore decided to concentrate on this genre. The pulse of the music, as it is referred to by the music researchers, is crucial.

“The pulse is key. The average frequency of body movement, which you would typically clap or march to, is 120 beats per minute (BPM). A lot of dance music has a slightly faster tempo, which acts as a trigger.”

Music with a regular beat, regardless of whether or not it is EDM or classical music, makes you move just as much – or as little – during the song.

“If, on the other hand, you listen to Norwegian folk music, which has a less regular beat, you will not see people’s micro-movements being affected in the same way. We conducted tests using classical Indian music, which has much longer underlying beats. When compared to stillness, there were no major differences in the movements.”

The complexity of the music determines how much we move.

“We conducted tests on the effects of different rhythmic complexities, ranging from a metronome to simple and then more dynamic and advanced music.”

“The metronome makes us move more than when standing still in silence. It shows that the beat is important. But the more complex the music, the more things start to happen.”

“When you dance to EDM music, the details create the energy. The song builds up, lifts and drops. This makes us move with increasing amounts of energy on the dance floor.”

“The same applies to us when we are still, where the music makes us sway, whether we want to or not.”

The type of music you listen to determines both how much you move and how you listen.

“When music is played through loudspeakers the sound physically comes towards you. You can feel it when you stand in front of a large loudspeaker at a concert. Consequently you might think that if we played music through a subwoofer at a “comfortable” volume, it would cause people to move a bit,” says Jensenius.

The researchers discovered that very few studies had been conducted on the difference between listening to the same music coming from a loudspeaker and through headphones.

“You would expect the headphones to shut out sensory impressions and that you would therefore move more, because you are shut inside your own bubble – physically and mentally.”

This turned out to be correct.

“Headphones make us move the most. The effect of losing a sense and being closed up “inside” caused much more movement than the physical movement caused by loudspeakers.”

Shutting out other sensory impressions by closing our eyes also produced the same effects on our ability to stand still.

“We saw that people moved on average 2 millimetres more per second when their eyes were closed,” says Jensenius.

It is well known that some people are enthusiastic dancers, while others are barely able to move their stiff hips. But can your personality determine how music affects your micro-movements?

“When it comes to dancing, body control and your relationship with the music makes a difference. At the same time, people who are “hopeless” and “tone deaf” are much better than they imagine. In my experience people dance well if they have the freedom to do so and if no-one is watching them. And that’s nothing unusual. It is nearly impossible to even walk down the street, or talk and listen to others, without having a sense of rhythm. Life is a dance – literally!” says Jensenius.

However, when it comes to micro-movements it does not matter whether or not you are a star on the dancefloor. Alexander Refsum Jensenius and his colleagues looked at the amount of time the test subjects usually devoted to dancing or playing instruments, and discovered that this did not have any impact on their micro-movements.

On the other hand, the type of personality you have is significant. Under the leadership of Agata Zelechowska, the research team conducted personality tests before they asked people to try standing still.

“The only definite finding was that those people who obtained a high score in respect of their emotional responses, such as empathy, moved more than others. This also accords with some other studies, and confirms theories which show that people with a higher degree of empathy will mirror other people more and relate more to their surroundings,” says Jensenius.

The results from their research project have also been used for art. In an installation called Sverm-Resonans (Swarm Resonance), consisting of self-playing guitars controlled by micro-movements. Read more and see the video of the installation at Ultima 2017.

Alexander Refsum Jensenius is a Professor at the Department of Musicology and the Deputy Director of RITMO – The Centre for Interdisciplinary Studies in Rhythm, Time and Motion at the University of Oslo. He works with music, movement and technology, and has extensive experience collaborating across scientific disciplines, and in artistic and scientific research.

MICRO Human Bodily Micromotion in Perception and Interaction is a research project which examines how music affects micro-movements – the tiny movements we see when we stand still. The project is funded by the Norwegian Research Council and is due to be completed in 2020.