Can you stand still for 7 minutes? Then you can become the new European Champion of Standstill, and win a gift card worth NOK 1000,-. 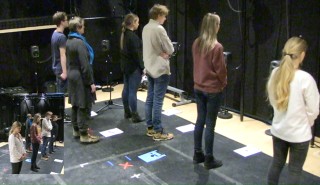 The European Championship of Standstill is a competition in which the participants stand still for 7 minutes, with and without music. The winner is the person that moves the least.

The competition is part of the research project MICRO - Human Bodily Micromotion in Music Perception and Interaction. The aim is to understand more about how music influences human body motion. We do not know very much about the smallest motion in the body, what we call micromotion. We study such micromotion by looking at how people stand still, both with and without music.

This year’s championship will be organized in connection to the EARMA conference in Oslo.

We use a high-speed motion capture system that can track body motion with millimetre precision. You will get a small marker on the head, and with this we can measure your micromotion while you stand still. We use the data from the marker to calculate the average speed of your movement (in millimetres per second). The one with the lowest number wins!

What do we measure?

If you would like to, you can get a plot of your own micromotion (similar to the one to the right). The plots on the top show the sideways motion (X-axis), frontal motion (Y-axis) and motion up and down (Z-axis). Below are plots from a bird’s perspective (XY), front (XZ) and side (YZ).

What does the participation entail?

Participation is voluntary, and you can withdraw at any point in time, without an explanation. No person-recognizable information is captured nor stored. The anonymized data will be made openly available for further analysis in the Oslo Standstill Database.

The championship is open for everyone that wants to participate. No person-identifiable information will be captured nor stored.