Oslo Mobile Orchestra (previously Oslo iPhone Ensemble) explores the future of mobile music performance in a collaborative setting. The ensemble is an ad-hoc group of students and researchers from the University of Oslo and Norwegian Academy of Music.

Our concept is building on previous work in the Oslo Laptop Orchestra:

These rules can be seen as limitations, but they are also liberating and gives the ensemble a clear aesthetic, visual and musical appearance.

The ensemble is organized as a pool of musicians. The following people have participated so far:

We perform with regular iPhones, using some small Sony Ericsson speakers to get a bit louder sound. The phones are connected to the speakers using a home-sown solution. 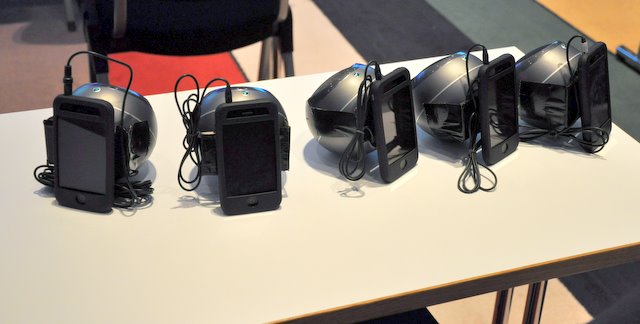 New performers are always welcome. Contact Alexander Refsum Jensenius if you want to be added to the list.