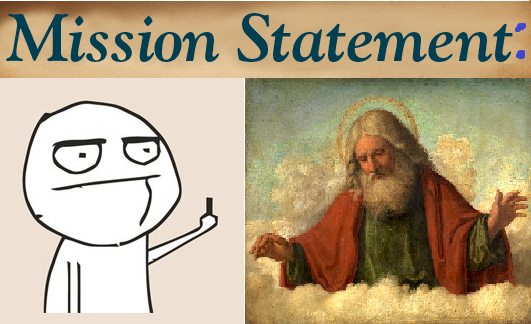 My mission, because someone has to

I am Major Tom

I have been stranded by my fellow spacefriends (Thanks, guys), and I am making this log to remind my self why I'm doing what I'm doing so I won't forget, how I did what I did so I can know how I fucked up the thing I will eventually fuck up, and to keep myself sane.

Life has been pretty shit so far, and the only high point was when I was chosen to go on a spacewalk, but that ended up in being abandoned(again, thanks for that), so now everything is pretty shit. That's why I have made it my personal mission to find God, whom is responsible for all this shit, and whom I believe lives on one of these planets, and give him the finger because fuck him.

The longest line between two points is the shortest. Curved space is flat when it's small. [some other weird thing that happens in relativity]. Experience this, and more, when you travel into the relativity zone.

Read more ...
With age comes wisdom, so let's be wise?

And with physics comes age? Welp, for some reason particles want to age. No idea why, but according to some geometric principles they do.

Let the fires of youth burn strong, do not go gentle into that good night.

Read more ...
Twins are psychic, don't let anyone tell you any different

Have you heard of the twins paradox? If one twin left earth on a rocket while the other stayed, and the travelling twin travelled around at really high speeds for a while, it would come back younger than the one that stayed. But if velocity is relative, why wasn't it the opposite way?

Read more ...
In hindsight, I really regret looking directly at the sun

You know how you're not supposed to look directly at the sun? Tell you what, I'm gonna go do that right now because to be honest I'm bored and I wanna study it, make wayyy too many assumptions and take this entire post way too far. Ready? If not, too bad, here we go!

Any landing you can walk away from is a good landing, right?.

So, because of the horrible cold and my following inability to leave my ship, this is an absolutely terrible landing.

Well, as long as it is a landing that didn't crash and burn, I am satisfied

Read more ...
Beam me down, Scotty

Last time on Spacey Balls P, we watched Tom as he struggled to find his way to Fræfdal, the land in which he believed God to reside. This time, after redoing his orbit because apparently he wasn’t close enough for the automatic landing to kick in, we watch as he attempts to scan Fræfdal for gases, lower his orbit to a suitable location and take lots of pretty pictures and videos while finding a landing spot. Can he do it, or will he fall and crash multiple times while talking to people who aren’t even there or even rapping against a fucking chair? Find out in this exciting new space-themed blog post of Spacer Stalls B!

Trying to get a read from where the satellites are, and filling them up with fuel is a whole other issue entirely.

Read more ...
Where am I and where am I going? pfft, I dunno, but I might figure it out

Have you ever been in such darkness, with the only light to guide you being millions upon millions of beautiful, glittering lights, shining at you from every direction? Where you don’t know what is up or down, floating endlessly, with none of your troubles bothering you?

I have, and it’s fucking underwhelming. It’s one of those things that sounds good, but ends up being pretty shit. I may be confusing being in space for being blindfolded and wedgied by my crewmates while there where lights flashing in front of my eyes because they also hit my head, but it can’t be that different, can it?

Read more ...
I think I might start sending some stuff into space

So we all know what it’s like to be abandoned in a less-than-pleasant environment and then have your only source of entertainment be building a spaceship so you can stick it to the Almighty. At least I hope so. Or maybe I don’t, it feels quite shitty. Ok, I do wish it upon Jerry. Fuck Jerry.

Maybe I was just having that kind of a week

When you want to launch yourself to another planet, you would like to know where that planet is, exactly. This is what I was thinking when I started building my simulation of the system I was in. I already had the data for where all the planets were, their speed and the masses of them and the sun, so all I had to do was calculate the force between the planets and the sun, see how much it moved them, then calculate the force at the new position and voila! Repeat endlessly for orbits of the planets. Here Newton was a great friend in calculating the motion of rocks (unlike Johnson, who preferred the rocks moving towards me at high speeds).

Read more ...
Maybe I should write things down
Read more ...
Feed from this page
UiO > University of Oslo >
Studies