The overall focus of our laboratory is to understand the molecular mechanisms of hormone action, especially that of androgens (testosterone) and estrogens, as they relate to prostate and breast cancer. To achieve this, we use molecular, biochemical, cellular, and genetic approaches. Part of this work relates to prostate and breast carcinogenesis/metabolic disease and hence is translational in nature from basic science to the clinic. We thus have collaborations with clinical colleagues in Norway and internationally and have identified a number of potential biomarkers and therapeutic targets for cancer. This specific MSc project focuses on functional evaluation of Six Transmembrane Protein of Prostate (STAMP) family of proteins, two members of which were cloned and characterized in our group, on PCa biology.

PCa is the most common non-cutaneous cancer in men and remains a key challenge for men’s health and a significant economic burden on society (Siegel et al., 2019). Majority of primary prostate tumors are treated successfully by radical prostatectomy or external beam radiotherapy, but often tumors progress to invasive and disseminated disease, and in many cases it is already metastatic at diagnosis (Attard and Antonarakis, 2016). Patients with metastatic PCa are treated with androgen deprivation therapy (ADT); whereas the initial response is very high, complete remissions are rare and disease progression resumes after a median of 2-3 years. The emergent castration-resistant PCa (CRPC) generally responds to recently developed androgen receptor (AR) inhibitory drugs, but their effect is transient and resistance develops. AR-independent disease, such as neuroendocrine PCa emerges and at this point no effective therapy exists, with prognosis very unfavorable and a median survival of 18 months. The goal of our laboratory is to provide a detailed mechanistic understanding of androgen signaling in PCa cells, to identify AR downstream factors that contribute to disease progression, which may also serve as potential biomarkers and therapeutic targets.

In this context, we have previously identified a number of genes that are differentially regulated in response to androgens and had enriched expression in the prostate, a major target organ for androgens. Two of the genes that we identified in this work were STAMP1 and STAMP2 (Korkmaz et al., 2002, 2005; Wellen et al., 2007; Wang et al., 2010; Lindstad et al., 2010; Jin et al., 2015; for a review, see Sikkeland et al., 2016). STAMPs are also called STEAPs with four members in the family. Consistent with a role in cancer development, both STAMP1 and STAMP2 expression is increased in PCa compared with normal prostate. Overexpression of STAMPs in PCa cells increases their proliferation whereas siRNA-mediated knockdown decreases cell growth. Furthermore, both STAMP1 and STAMP2 inhibit apoptosis in PCa cells. Interestingly, STAMP2 knockout mice spontaneously develop all the hallmarks of the metabolic syndrome on a regular diet indicating that it has an important role in regulating metabolism (Wellen et al., 2007; Lindstad et al., 2010). Consistently, STAMP2 also affects metabolic pathways in PCa cells, including those involved in ER stress (Sikkeland et al., 2019). Futhermore, STAMP2 is involved in regulating macrophage inflammatory responses and atherosclerosis in mouse models (ten Freyhaus et al., 2012). Interestingly, nanoliposomal STAMP2 specific siRNA delivery in mice results in dramatic tumor regression in two independent models of PCa (Yang et al., 2015). These findings warrant more detailed analysis of STAMP function in normal cells, as well as under pathological conditions.

Characterization of the interacting partners of STAMPs and the respective signaling pathways. The knowledge of the interacting partners of any protein is important to delineate their function. We have thus used the yeast two-hybrid assay and identified several potential STAMP interactors. The validation of the interactors for STAMPs and their functional consequence(s), if any, is in progress, and has already been established for some of the interactors. The different lines of investigation in this project is to carry these forward, validate them in PCa cells, and determine if they have functional consequences in vivo. To that end, several approaches are being used. First, coimmunoprecipitation assays are utilized to study the interactions in vivo. Second, GST-pulldown assays are used to complement the coimmunoprecipitations and study interactions in more detail. Third, possible colocalization in cells is determined by immunoflourescence microscopy. Fourth, functional interactions are assessed using a variety of assays based on the interacting protein involved. For example, if an interacting protein is known to be involved in cell death, assays related to this area will be utilized to assess the potential consequence of this interaction to cell death in PCa. Several potential functional interactors are currently under investigation.

In this project, you will gain expertise in the following experimental techniques: mammalian cell culture, siRNA-mediated gene silencing in vitro and in vivo, biochemical assays, qPCR and Western analysis, advanced microscopy methods, and experiments in mice, as well as some bioinformatics tools. Since we are a molecular and cell biology laboratory with a keen interest in translation into the clinic, we use a variety of methods, which is one of the strengths of our research environment for an MSc project. In addition, during the weekly lab meetings, everyone take turns (one person per week) to either present her/his work or an article from the field, which will improve your scientific presentation skills.

You will work closely with a PhD student and/or a postdoctoral fellow. We are especially interested in those students who are already considering a career in science and would like to get experience in an internationally competitive laboratory. For more detailed information on the project and our laboratory, please see our website at https://www.mn.uio.no/ibv/english/research/sections/bmb/research-groups/epigenetics-generegulation/cellsignaling-cancer-saatcioglu/ For questions and more information, please do not hesitate to contact Fahri Saatcioglu at fahris@ibv.uio.no, 22854569. 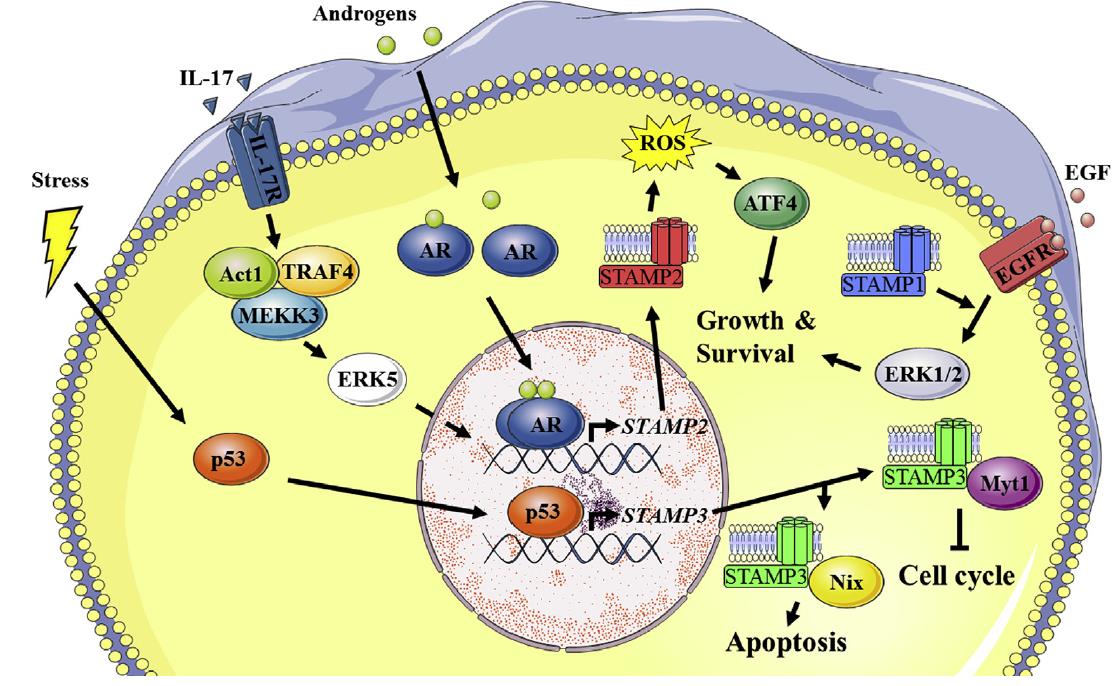 Figure 1. Involvement of STAMPs in cancer. STAMP1 promotes PCa cell growth by mediating activation of ERK1/2. STAMP2 expression can bedirectly induced by androgens in AR-positive PCa cells, and it plays a pro-survival role in these cells by increasing ROS, which subsequently induces ATF4. In keratinocytes, IL-17, via its receptor IL-17R, initiates a pro-proliferative signaling cascade Act1-TRAF4-MEKK3-ERK5 that results in elevated STAMP2 expression. In contrast, STAMP3 can be directly activated by p53 and plays a tumor suppressor role by interacting with Nix or Myt1. (Sikkeland et al., 2016).