Animals are multicellular, eukaryotic organisms with a facultative "endosymbiont", the mitochondrium. Eukaryotic cells have enslaved a prokaryote as their energy powerhouse. In this process the mitochondrial genome was substantially reduced in size and gene content, so that in animals it usually has 37 genes total. While mitochondrial genomes exhibit a high substitution rate, the gene order, called gene synteny, is often very conserved and changes little over time. However, this is not always true and substantial changes can occur. Given the small size, the clear set of genes available and the vast amount of mitochondrial genomes available they are an ideal system to understand principals of genome evolution. In this project the aim is to contribute to this discussion and find out what are the causes driving the evolution of the genome, specifically the gene order in the genome. Therefore, macroevolutionary methods and tools shall be brought to bear on to the problem for the first time. This requires access to robust phylogeny as well as plenty of mitochondrial genomes. 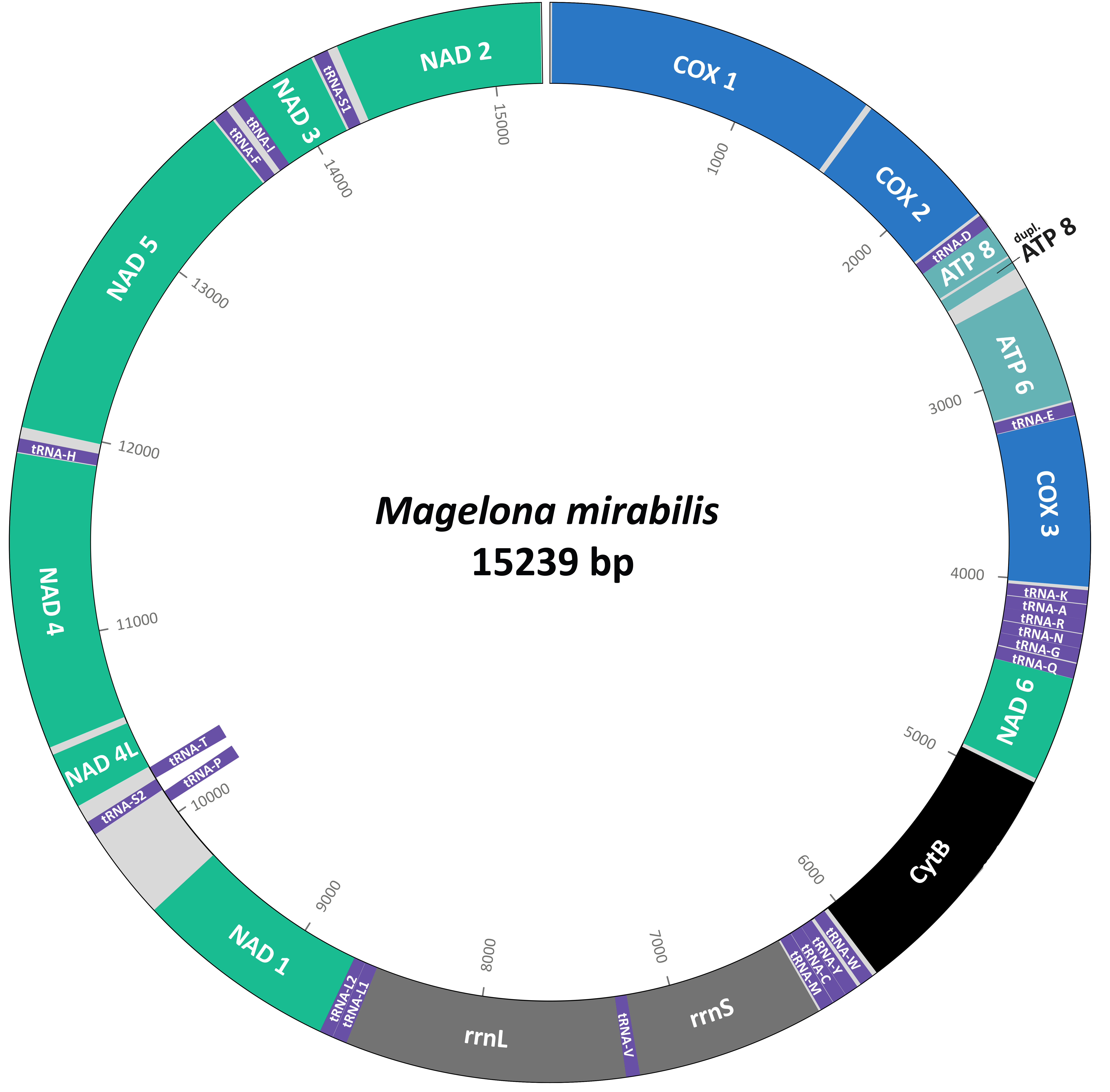 An example of an annelid mitochondrial genome.

The segmented worms, Annelida, are such a system. Recently the phylogeny of Annelida has been robustly solved. Moreover, Annelida have both extreme conservatism in mitochondrial gene order and subgroups with extreme flexibility. Moreover, up to 100 mitochondrial genomes are available in our laboratory across the whole annelid tree of life providing coverage for all degrees of gene order evolution. Hence, using Annelida as model system and based on a phylogenetic framework the mitochondrial genome evolution can be investigated in relation to both molecular and ecological factors. The effect of differences in habitat preferences or life histories can be assessed quite similar to molecular properties such as frequency of specific nucleotides or amino acids of both the mitochondrial and nuclear genomes. The sequences of the small ribosomal subunit (18S) can thereby serve as a proxy for the nuclear genome and is available as well.

Aim of this Master project:

The student will be supervised by Torsten Struck and José Cerca de Oliveira (NHM Oslo) as well as Asmaa Haris Elgetany (Damietta University, Egypt), Kjetil Voje (UiO) and Dimitar Dimitrov (UiB). You will be provided with a broad training in different aspects of biology, which includes, among others, bioinformatics, phylogenetic reconstructions, statistics, comparative genomics, as well as metazoan evolution and systematics. All of these techniques are state-of-the-art techniques, which are relevant for both academic and non-academic positions including medical fields as mitochondrial malfunction is the cause some human diseases.