This project aims to optimize CRISPR-Cas9 technology for therapeutic use in genetic blood diseases. The goal is to develop a personalized therapy that can correct patient-specific mutations in autologous harvested stem cells, which will then be given back to the patient.

Gene therapy can circumvent most problems related to HSCT. In conventional gene therapy, a functional copy of the defective gene is inserted by a viral vector to harvested patient stem cells, which are then infused back after little or no chemotherapy conditioning. Virus-based gene therapy can, however, only treat selected gene defects, whereas the current number of causative genes for monogenic blood diseases is >500. Although very effective in certain conditions, it is not a cure for the majority of the patients. 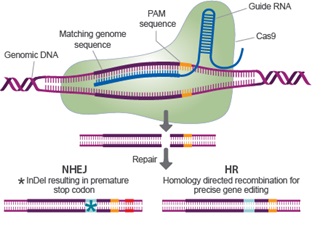 Figure 1. CRISPR-Cas9 system. The Cas9 nuclease scans the DNA with the help of the guide RNA (gRNA). Once the pairing with DNA and gRNA is perfect, Cas9 cuts the DNA. The resulting double-stranded break is corrected by the cell’s own DNA repair mechanisms. Non-homologous end-joining (NHEJ) “glues” the DNA ends together, resulting in a small deletion. Homologous recombination (HR), in contrast, can make precise changes to DNA if a repair DNA template is provided. HR is the desired outcome for most gene therapy applications.

CRISPR-Cas is a novel gene editing technology which can correct patient-specific mutations (“precision genome editing”), and is currently used in clinical trials for HIV and cancer immunotherapy5. A single CRISPR-Cas – platform can potentially treat a large number of conditions and mutations, thus vastly outperforming the viral approach. CRISPR-Cas involves a Cas nuclease attached to a guide RNA (gRNA) that leads the nuclease to a defined genomic location, which the nuclease then cuts. The cut induces the cellular DNA damage response. The cell can repair the cut either by homology directed repair (HR) or non-homologous end joining (NHEJ) (See Figure 1). Generally, repair by NHEJ is the most common outcome, causing a small deletion and gene knockdown. Repair by HR is less frequent, but allows the incorporation of a specific mutation, if a repair DNA template is provided.

The CRISPR-Cas gene therapy technology has developed significantly in the last two years. Currently, the most efficient hematologic gene therapy system utilizes Cas9-sgRNA complex delivered as ribonucleoprotein (RNP), and repair template via adeno-associated virus (AAV) (see Figure 2A). Repair template delivery as naked DNA results in low editing efficiencies, which is thought to be due to type I interferon response triggered by the DNA and the CRISPR-Cas9 RNP.

We are developing an alternative, cheaper approach that –unlike virus-based technologies- is easy to scale into high-throughput clinical use (Figure 2B). This system utilizes a modified Cas9 nuclease that is more efficient in inducing HR and precision genome editing than wild-type Cas9 (see Fig. 3C). In addition, as HR-mediated mutation correction happens exclusively in the synthesis (S) phase of the cell cycle, we will use an inhibitor that allows Cas9 only to be active in the S phase, thus increasing safety of the technology. Furthermore, we have recently shown that the stem cell death is mainly due to p53-mediated apoptosis and DNA damage response that is caused by Cas9 cutting. Therefore, we will transiently inhibit p53 during genome editing. 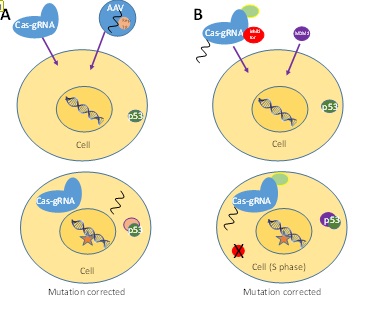 Figure 2. Schematic representation of the study. Currently, the most successful gene therapy approach for hematopoietic stem cells utilizes Cas9-gRNA delivered as ribonucleoprotein complex (RNP) and repair template within adeno-associated virus (AAV) (A). In our study, we will utilize Cas9 that is engineered to induce HR in high efficiency (green dot) and carry the repair template (black). Furthermore, an inhibitor (red) is noncovalently attached to the Cas9. When the cell enters the synthesis phase, the inhibitor is degraded, the Cas9 activated and the mutation corrected. MDM2 (violet) is used to transiently inhibit p53 and the mutation corrected.

The study in preclinical stage and has multiple subprojects. The work will be tailored based on the interests of the particular student. Examples of projects include:

• Combine the already developed improvements (see Fig. 2B) and test these in hematopoietic cells

• Screen novel proteins that, when fused to Cas9, improve editing in model cell lines and eventually in primary cells

• Collect cells from patients with monogenic blood diseases, edit the cells both with conventional and modified CRISPR-Cas9 system, and assess the editing outcome to see if certain conditions are particularly easy or hard to edit

• Edit healthy blood stem cells, and transplant the edited cells to SCID mouse models to assess their capacity to form a functional hematopoiesis