Idiotopes are antigenic determinants found in B cell receptor (BCR) variable regions. Recently (Huszthy PC et al., 2019 PNAS), we demonstrated that ligation of the idiotope-containing BCR by antigen (Ag) promotes the expression of idiotope-derived (processed) peptides in complex with MHC class II protein (called the pId:MHCII complex) on the B cell’s surface. Cell surface expression of pId:MHCII in turn enables binding by Id-specific CD4+ T helper cells via their T cell receptor (TCR). TCR recognition leads to the acquisition of T cell help by the B cell, leading to a reciprocal stimulatory circle. T cell help enables the Id+ B cell to differentiate into germinal center B cells and later into memory B cells or plasma cells. Plasma cells make Id+ IgG (isotype-switched antibodies that carry the idiotope).

A dangerous aspect of such Id-driven T-B cell collaboration is that the help provided by idiotope-specific T cells after recognition of the pId:MHCII complexes may short-circuit physiological tolerance mechanisms (that is, break the rule of discriminating between “self” and “non-self”). Thereby, Id-driven T-B cell collaboration may in the long run contribute to the development of autoimmune diseases. Evidence for the involvement of Id-driven T-B collaboration in systemic autoimmune disease and in B cell lymphomas in mice has been demonstrated (see Fig.1 and publications by Munthe LA and Bogen B, 2007-2017), and evidence in human pathology is emerging

Building on our recent publication, we aim to investigate intracellular processing pathways for the BCR and BCR-bound antigen (Ag) in Id-driven T cell-B cell collaboration. Hernandez-Perez et al., (2020, Journal of Cell Science) showed that in murine B cells, heterogeneous vesicles appear near the cell surface immediately after internalization of BCR-antigen complexes. These early vesicles seem to be mixtures of early and late endosomal compartments, which show hallmarks of MHCII peptide loading compartments (MIIC) with degradative capacity (with presence of the proteolytic enzyme Cathepsin S). Ag is present in these compartments already 1-10 minutes after binding to the BCR on the cell surface. We hypothesize that endocytosed BCR will be similarly found in these compartments, since current knowledge suggests that BCR-Ag complexes are internalized together. Thus, in these compartments, rapid processing and export of Ag-derived and Id-derived peptides to the cell surface must be enabled.

Since the BCR is the source of Id-peptides and the bound Ag is a source of Ag-derived peptides, a B cell may potentially interact with both Id-specific- and Ag-specific T cells (see Fig.2). Although we have shown that populations of Id+ B cells may stimulate both T cell populations (unpublished data), it has not been shown whether one and the same B cell may interact with Id-specific and Ag-specific T cells at the same time, or subsequently. Resolution of this issue will answer scientific questions related to the provision of help by T cells to B cells, and give us a deeper understanding of the regulation of pathological B cells by T cells. By comparing Id- and Ag processing intracellular pathways, surface expression of pId and pAg, as well as interactions of Id-specific and Ag-specific T cells with B cells, we will obtain an overview of the synergy between Id-driven and Ag-driven T-B collaboration. 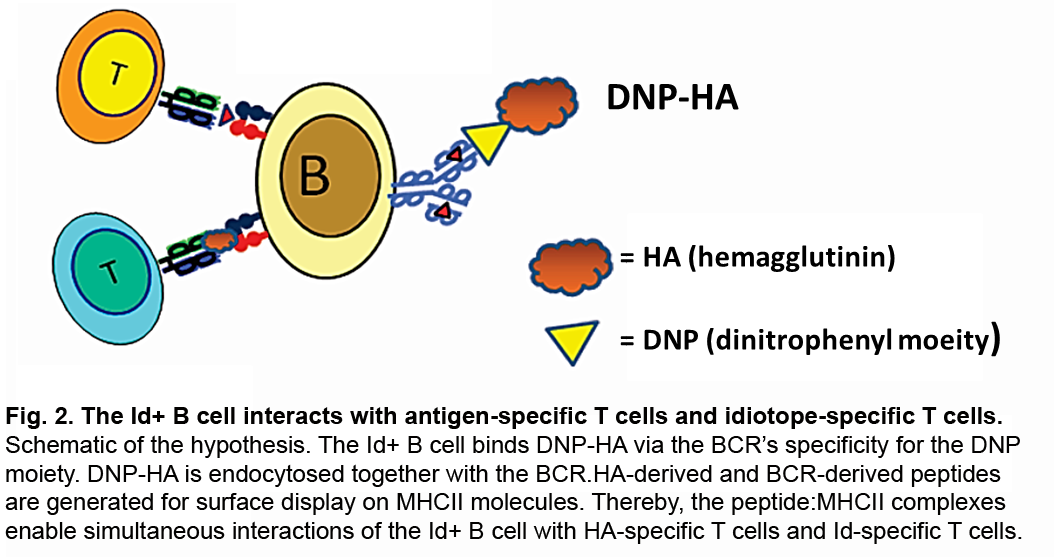 Given the above, we propose following objectives:\

The student will use confocal- and time lapse microscopy to investigate internalization and processing of the BCR and Ag after BCR crosslinking. BCR and Ag will be fluorescently labelled and followed after co-staining with well-known markers of the early endosomal, late endosomal and lysosomal compartments (Rab proteins, EEA-1 and LAMP-1). Preliminary experiments using mass spectrometry have shown that Id+ IgG (analogous to the Id+ surface BCR) is cleaved by Cathepsin S. In vitro processing of Ag specific for the Id+ BCR will similarly be done to map peptides that are cleaved by relevant proteases, and to track their trafficking in the cell. Cathepsin activity in the compartments will also be measured by microscopy.

A detection reagent for pId:MHCII expressed on the cell surface is available. For detection of pAg:MHCII, we have developed a staining reagent that incorporates a recombinant TCR (clone LD-1, a PR8 influenza virus hemagglutinin-peptide specific TCR). To generate the BCR ligand (source of pAg), hemagglutinin will be chemically coupled to dinitrophenyl moieties to render it specific for the Id+ BCR. It will be important to rule out cross-reactivity of the reagents for pId:MHCII and pAg:MHCII by optimizing the staining conditions. Labelling will be analyzed by FACS and confocal microscopy. We will find evidence for whether pId:MHCII and pAg:MHCII are presented on the same cell, and we will investigate the kinetics.

The student will be supervised by Peter Huszthy (researcher, Bogen group) on all aspects, except confocal imaging, where help will be provided in the group of C. Progida (IBV, UiO).

Work environment: Dept. of Immunology is situated at Oslo University Hospital at Gaustad (Rikshospitalet). The lab is in a relatively new building that also houses an excellent animal facility. The lab is spacy and well equipped. Access to relevant core facilities is very good. The department is internationally flavored (Netherlands, Serbia, India, Iceland, Germany, England, USA).