Fridtjof Nansen: A pioneer of knowledge

Fridtjof Nansen’s appetite for scientific discovery left a mark that inspires a wide range of academic disciplines, right up to the present day. Nansen’s research was important for a young nation, and he served to inspire it to shift its course away from Sweden and towards the sea and the High North.

Much attention is devoted to Fridtjof Nansen’s talents as an academic and researcher. Nansen contributed knowledge to oceanographic disciplines which, even to this day, are still inspired by his work and vision.

Nansen crossed Greenland on skis in 1888, crossed the Polar Sea with Farm between 1893 and 1896, and set out to the North Pole on skis, though he never reached it. Nevertheless, his travels and his taste for adventure are what Nansen is best known for. But Nansen was also a gifted researcher, almost a multi-faceted genius, and possessed both breadth and depth of repertoire.

Nansen wrote his doctoral thesis in neurobiology during a stay at the Bergen museum. His conclusions were treated with scepticism, but in retrospect they show that Nansen’s research was ahead of its time. In fact, Nansen’s biographer Roland Huntford maintains that Nansen’s research in this field was worthy of a Nobel Prize in medicine.

The disputation for his doctoral degree took place at Norway’s only university at the time, the Royal Frederik’s University in Kristiania, now the University of Oslo, on 28 April 1888. In modern times it has become evident that Nansen’s doctoral thesis was ground-breaking. In an editorial in the reputable journal Brain, Nansen’s doctoral thesis is presented as a paradigm shift in neuroscience which “altered the course of neuroscience” (Alastair Compston 2010 Brain 133:2173-2175). 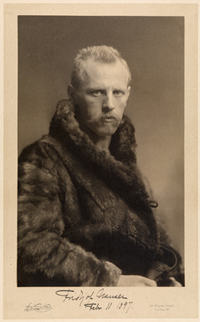 Fridtjof Nansen never followed up his studies of the nervous system, though he later came to be a source of inspiration for Norwegian neuroscience researchers. What he did follow up from his doctoral thesis, however, was his study of food species. He studied the nervous systems of the slime eel as well as that of the lobster, crayfish and shell.

Nansen devoted much of his time to understanding the ocean and ocean life, and was a professor of zoology between 1897 and 1908 and of oceanography between 1908 and 1930 at the Royal Frederik’s University.

In other words, for Nansen the future of science revolved mainly around the Polar Sea. When Nansen set out on his expedition with Fram in 1893, it was as much about investigating the ocean currents as it was about conquering the North Pole, and he saw no contradiction in motivation between them.

In collaboration with Bjørn Helland-Hansen, Nansen proved that the seabed could reach sub-zero temperatures. He used this knowledge of sea temperatures to say something about the marine biology, including the variation in fish stocks. Knowledge of variations in fish stocks has been important in work on managing fish resources. Nansen’s contribution in this field has had significance for the fish management regime that exists today in the High North.

Nansen’s measurements of ocean depths provided new insight into the ocean areas in the High North. The general perception was that the Polar Sea was shallow, but Nansen pointed to ocean depths of many thousands of metres. He also measured areas of underwater elevations on the seabed. And, not least, Nansen was interested in the climatic significance of the sea. Through systematic observations, Nansen also studied heat absorption in snow and ice. This was almost 100 years before the debate on climate change began to take a closer look at the Polar regions.

Nansen also contributed to technology. After the Fram expedition, he noticed that the instruments on which he had relied so heavily were no longer as precise as they had been. When he was appointed as a representative to London following the dissolution of the union with Sweden in 1905, he found the time to collaborate with British experts on the development of oceanographic instruments.

Nansen’s importance to a young nation was something of which he himself was well aware. Before the Fram expedition he underlined the national significance: “Let it be Norwegians who show the way! Let it be the Norwegian flag that first flies above our Pole.”

When Nansen and Helland-Hansen published the book entitled The Norwegian Sea in 1909, it contributed to the term “Norwegian Sea” acquiring international acceptance. It is difficult to imagine how Norway could have secures ownership and management rights over these extremely valuable sea areas without the knowledge which Nansen had helped to accumulate.

He is also renowned as one of the founders of the International Council for the Exploration of the Sea (ICES) and made significant contributions to the Norwegian Academy of Science and Letters.

Nansen and UiO: Not a man for celebrations

Fridtjof Nansen did not take part in the first centenary celebrations for what is today the University of Oslo. He was somewhere off the coast of Arendal and, in his biography, Harald Dag Jølle writes that Nansen probably wanted to express a certain disdain for ‟ostentatious pomp and show and buildings.”

Between 1919 and1921 Fridtjof Nansen was in fact elected as rector of the University of Oslo, but he never took office. He had other goals, which would also prove to leave their mark in the annals of history. Inspired by Woodrow Wilson, Nansen then shifted his focus to diplomacy and humanitarian causes, and in 1922 he received the Nobel Peace Prize for his international efforts on behalf of refugees after the First World War.

Driven by a thirst for knowledge

In the course of his life and work, Nansen had touched on many different areas of science: neurobiology, marine zoology, oceanography, meteorology as well as engineering. The story can also be told of a man who was driven by a thirst for knowledge as much as for a taste for adventure, discovery and excitement; but does this really hold any contradictions?

By By Stein Roar Fredriksen
E-mail this page