10 years of Human Rights at the International Summer School

How universal are human rights? What is their function? For the past 10 years, students have come from all over the world to discuss and acquire critical perspectives on human rights at the International Summer School at UiO. 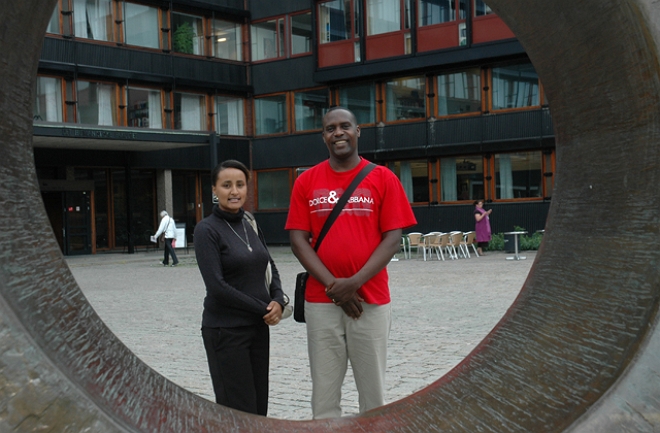 10 years ago, they set course for Norway and the International Summer School to learn more about human rights: Emebet Getachew from Ethiopia and Richard Kabate from Tanzania. Photo: Martin Toft/Uniforum

2020 marks the 10th anniversary of the Master's course "Human Rights" at the International Summer School (ISS), UiO. The course was held for the first time in 2010 (uniforum.no) (Norwegian), with course leader and professor at the Norwegian Center for Human Rights Stener Ekern, in collaboration with Ingvill Thorson Plesner and Malcolm Langford.

Request from the upper echelons

Right after I had been appointed rector in 2009, I suddenly received a letter from former US Vice President Walter Mondale [then Norwegian Honorary Consul General in Minneapolis], who wanted to meet with me. We met, and the reason gradually became clear.

Ottersen quickly discovered that the meeting was not to be about Norwegian-American politics, nor the university. Mondale was interested in the ISS, which in 1947 was established as a Summer School for American students as a thank you for all the Norwegian students who had been allowed to continue or complete their studies in the United States during and after World War II. Mondale called the ISS "a remarkable mission" and thought it lacked a course in human rights, which he believed to be an important part of Norwegian tradition. "If you also believe it to be important, how quickly can you have it in place?" he asked the UiO rector.

In 2009 it appeared paradoxical that we administer an annual international summer school in the city where the Nobel Peace Prize is awarded, without having a course in human rights. With an active and internationally recognized center for human rights, we were in a good position to establish an ISS human rights course. Human rights are important for UiO; we are part of the Universities Against the Death Penalty network, work actively with Scholars at Risk, which has an important human rights aspect, and in 2011, we launched The Lancet - UiO Commission on Global Governance for Health, another testament to UiO's desire to be part of the work for human rights, says Ottersen.

UiO's Norwegian Center for Human Rights accepted the challenge, with Professor Ekern as project manager. The course is now in its 10th year with Ekern once again as course leader. As a result of the corona pandemic, the course is held digitally and also over a shorter 4-week period. Although the virtual classroom differs from the online classroom, Ekern says the course has not changed much in the 10 years.

The course has not changed conceptually. What is the function of human rights in the world? It has been important for us to demystify human rights, from something understood as a kind of “totality of moral commandments” to examining how law is anchored in local convictions of what is right and just, and how human rights can be a practical tool for justifying local laws based on internationally recognized convictions of justice and fairness. When we usually go on excursions to national institutions and NGOs in Norway, it is not to show students how to implement human rights, but to show examples of how it can be done.

Excursions to NGOs and institutions in Norway have been an important part of the course since the beginning, and women’s and minority rights have always been an important aspect. But students are often surprised at the lack of totality of human rights, says Ekern:

There is definitely a large international demand for a course like this. But human rights are a horizon, not a recipe for creating the perfect society. Human rights are contradictory, and one must weigh considerations here as elsewhere in life. Students do not get definitive answers from the course, but rather acquire critical perspectives.

Gentian Zyberi, head of the Norwegian Center for Human Rights, is also a member of the UN Commission on Human Rights (ohchr.org) and the Permanent Court of Arbitration (pca-cpa.org). He was course leader in 2015, and has been a regular guest lecturer for many years. Zyberi says the international student group makes this course unique.

The course is a miniature of our Master’s program at the Center. We engage with many human rights issues within the summer course. Teaching an international classroom is exciting because such a class brings together participants from different countries, with different academic backgrounds and experiences, and creates a space for sharing knowledge and experiences, a window to the world. The combination of the different educational background of the participants, their experiences and knowledge of the national human rights situation, the possibility to share these experiences and knowledge with each-other, and the possibility of making friends and expanding their professional network makes the course different from a regular course.

Ottersen points out that UiO's Summer School is better known abroad than in Norway, and that admission to ISS Master's courses is competitive. – Students in these courses come from all over the world, and the great diversity is due in part to the scholarship program that the Summer School has established, says ISS director Nita Kapoor:

Our ideals spring from a belief in the pedagogy associated with "the international classroom", where students bring different experiences and perspectives in interaction with course content and each other. The scholarships are important to ensure a wider range of perspectives, both across the global north and south, but also across gender, age, economic and academic background, and philosophical and religious orientation.

It is these differences between people, more than their nationalities, that bring out the biggest differences in students’ views on human rights, says Ekern.

The students benefit greatly from the course, and several go on to NGOs, PhD programs or legal positions that deal with human rights issues.

It is valuable in itself that knowledge about human rights is shared among students and young professionals from all parts of the world, and also shows that UiO contributes to this field, says Zyberi.

The Department of Human Rights, the forerunner of the Norwegian Center for Human Rights, was established in 1987, after the government saw a need for expertise and the Research Council of Norway opened for a program. Ekern emphasises the importance of human rights for Norway, even though Scandinavia was initially sceptical of human rights until the 1970'ies.

Human rights support the creation of an increasingly civilised international society. It has nothing to do with the essence of Norwegians, but rather that we are totally dependent on living in a rule-based international society–the exact opposite of what India and China are doing at the moment to determine their common borders. Since the Middle Ages, Norway has had to balance between Sweden and Denmark, Germany, England and Russia to survive as a state. The international game that the human rights were made to tame is as fundamental to Norway as fish and oil.

For 10 years, the Center has run the Master's course together with ISS, despite the fact that summer in Norway is a sacred time for university faculty, something Ekern describes as a challenge. Kapoor agrees:

To create a Summer School, we are completely dependent on faculty spending part of the summer teaching, and we greatly appreciate the efforts of all our course leaders. This year, we extend an extra big thank you to the Norwegian Center for Human Rights for excellent collaboration over the last ten years, which we hope will continue in the years ahead.