Why choose this programme option?

Roughly speaking, astrophysics is the study of anything and everything outside the Earth's domain, including the Moon, the Planets, interplanetary space and the Solar Wind, the Sun, the stars, the Milky Way, Galaxies, Galaxy Clusters, and the birth, evolution and structure of the Universe itself.

Astrophysics is a field where there is little "laboratory" work, instead contact with reality must necessarily go via various remote sensing methods. This is perhaps the reason that astrophysicsts were amongst the first to develop numerical techniques to model quite complicated systems and to use high performance computers as a laboratory, or test bed, to confront their theories with observational reality. 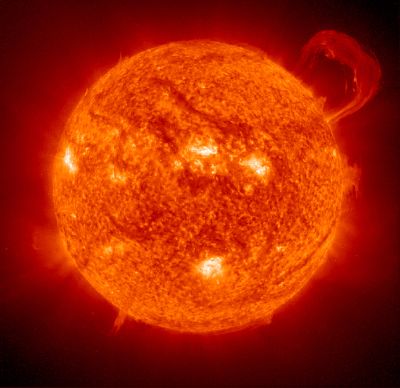 In particular, at the Institute of Theoretical Astrophysics (ITA), computational astrophysics is mainly concentrated on three subjects:

Sufficiently stable to nurture life during the last 4 billion years, and modern humans the last 100,000 years, the Sun is nevertheless a variable star. While the total solar irradiance only varies of order 0.1% during the 11-year solar cycle, the high-energy portion of the solar output can vary by several orders of magnitude on timescales of minutes.

Solar activity - sun spots and active regions, UV and X-ray emission, the million degree corona, flares, coronal mass ejections, the acceleration of energetic particles - is increasingly interfering with human activity as our society’s dependence on sensitive electronic equipment grows and as we venture beyond the Earth’s magnetosphere and into the solar system proper.

There is thus a pressing need to understand the workings of the energetic Sun.

At the ITA we have a goal of solving the problems of understanding and explaining the active sun. This means that we wish to build numerical models of the solar atmosphere good enough that we can construct synthetic spectral lines and images that can be directly compared with the observations. We have access to the best observables; members of the solar group at the ITA are Co Investigators on ESA's SOHO mission, NASA's IRIS and SDO missions, and JAXA's Hinode mission, as well as having 42 days of observing time at the worlds premier solar telescope, the Swedish 1-meter Solar Telescope on La Palma (Canary Island).

Involve students at the forefront of science

To model the Sun we have constructed the Bifrost code, currently the worlds most advanced code for modeling the solar chromosphere and corona, and a code that we plan to expand to incorporate more advanced physics such as Generalized Ohm's Law, Multi-Fluid dynamics, and particle effects on relevant subregions. This set of tools gives us a fighting chance of solving the puzzles that confront us, but also the chance of involving our students in exciting work at the forefront of science with a mix of observational, theoretical, and/or numerical tasks.

Galaxies are the building blocks of the Universe. Our home Galaxy, the Milky Way, hosts tens of billions of stars like the Sun, and the Universe contains about one to two hundred billions of galaxies. Galaxies come with different varieties, some with grand design spiral arms like the Milky Way, some with the shape of an ellipsoidal, and still some galaxies look completely irregular. Virtually all large galaxies (including the Milky Way) harbour supermassive black holes (SMBHs) at their centre.

The vast space between galaxies are filled with gaseous intergalactic medium. Following the underlying dark matter structure, the gas accretes onto galaxies, and fuels the star formation and black hole growth within them. In turn, the stars and supermassive black holes inject energy, momentum, radiation and metals (elements with atomic number larger than Helium) into the surrounding gas which impact the subsequent accretion and star formation.

When and how did the first galaxy form from the initial quantum perturbations? How do galaxies evolve throughout the cosmic history? What causes the galaxy population to be so diversified? And how do supermassive black holes form and co-evolve with the host galaxies? How did the radiation from first stars and black holes transform the intergalactic gas? These are some of the central questions we want to address in modern cosmology.

Simulating such complex and non-linear systems numerically is a highly challenging task, one needs to not only cover a large dynamic range, but also model simultaneously many physical processes (gravity, hydrodynamics, turbulence, star formation, black hole formation, radiation, magnetic field and perhaps cosmic rays etc.). At the ITA, we simulate cosmological galaxy formation with state-of-the-art hydrodynamic codes and sophisticated models of physical processes, including the one that has successfully simulated the world’s first realistic Milky Way-like galaxy.

A golden age for cosmology

We also developed a world-leading radiative transfer code to produce synthetic observations to confront simulations with the data. We have local expertise on observations of high-redshift galaxies using first-rate gravitational lensing data from the large Sloan Giant Arc Survey and the future Euclid satellite, as well as multi-wavelength data from major ground-based and space telescopes like HST, Keck, ALMA, GAIA and the upcoming JWST on galaxies at both early Universe and current epoch. It is the golden age for cosmology and extragalactic astronomy and students will be involved in exciting and fruitful projects at the ITA.

Did you find what you were looking for?
E-mail this page
UiO > University of Oslo >
Studies >