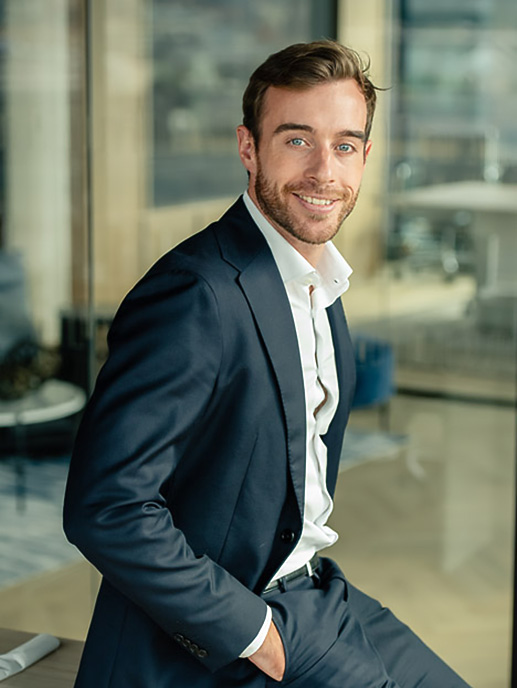 Haakon Føyen has worked at the medium-sized law firm Advokatfirmaet Føyen since 1 January 2022. Previous workplaces are the law firm Simonsen Vogt Wiig, and Ally Advokater, during it's year of establishing itself. In Simonsen Vogt Wiig he worked as an associate lawyer within the field of technology and media. At Ally Advokater, he worked with concept development. As a new law firm, they envisioned making the law more accessible to companies and individuals, in new and different ways. His tasks consisted of conducting market analyzes, system testing and product development.

His current workplace, Føyen law firm, are specialists in Information and Communication Technology law, and thus a natural place for Haakon to work.

A normal day in this job consists of helping companies draft and negotiate. Since we work with IT, the working language is often English. Most IT systems process personal data, so I also have to consider the regulatory issues concerning data protection and privacy law and not just contract law. Contractual and regulatory issues often go hand in hand, but are also quite different approaches to practicing law, he says.

While studying ICT-law, Haakon attended courses that he benefits greatly from in his job today. In particular, the courses in Intellectual Property Rights in the Information Society, Electronic Commerce Law and subjects relating to data protection and privacy.

– I also hold the regular Norwegian master's degree in law (Masters of Law) at UiO, he says. – At a previous job, I had several international colleagues who took the LL.M in ICT-law at NRCCL, but had taken their previous law degrees in other countries.  We then worked almost exclusively with international cases and foreign clients. I think my two degrees complement each other very well. I work with Norwegian law, so most of what I do I learned from my Masters of Law studies, but the language and the technical terms I use in my job comes from my LL.M in Information, Communication and Technology Law.

Haakon further states that the most important outtakes from his studying period was learning legal methodology, academic writing, and establishing relevant networks.

– One of the most important things during the studies is to participate in events and theme evenings, he explains. – There you can establish relations and talk to people about what they are working on. When I attended these events, I found out a lot about what industries believe is relevant and what they need help with. You also get to connect with possible future employers. Such events gave me an impression of what society and companies demand and what was relevant, he says.

The Norwegian Research Center for Computers and Law (NRCCL, who's offering the LL.M in Information and Communication Law at UiO) has close ties to Norwegian Association for Electronic Data Processing (Norsk forening for jus & EDB, (NFJE)) and similar associations. As a student Haakon involved himself with several such associations. There he made contacts that have been valuable in his later work life. One event Haakon attended was particularly crucial for his career.

– My attendance at the Oslo Legal Hackaton was one of the reasons why I was noticed in a recruitment process, he explains. – Also, the event was an eye opener for me regarding Legal Tech. I first joined the competition for a team from the law firm Simonsen Vogt Wiig and the next year I participated as a mentor that helped one of the teams that won.

Haakon also took the opportunity to go on an exchange semester at Bond University in Australia during his studies, he had internships in several law firms and he worked as a research assistant at UiO for NRCCL. He recommends using available opportunities during your studies to find out what you enjoy working with, both in theory and in practice.

– There are very many private actors in business law who are looking for candidates with knowledge of media and technology law. There is also a high demand in the public sector, and several opportunities within academia. I would recommend everyone to try different places, so you get a sense of what it is like to work there and what suits you, Haakon advises.

Haakon believes students who want to work in his field should have an interest in technology, and must stay up to date on what is happening. He also recommends to participate in relevant events, get to know people and try to get decent grades.

– Good grades are important for many firms, but within this industry it is perhaps even more important to be relevant and to stay updated, as the technology industry moves at great speed, Haakon says. – If you're coming from abroad and want to work in this industry in Norway, it might be wise to pay attention to this. Paradoxically though, it is often easier to get jobs in larger renowned firms than smaller local ones. This is because the largest and best companies are usually aware of the quality of international candidates, while smaller Norwegian companies in my experience often are hesitant or even reluctant to hire international candidates.

Technology at the forefront

When asked if Haakon has wishes or dreams for the future, he answers that first and foremost, he wants to be amongst the best in his field. It seems that he is in the right place, as Føyen's department for media and technology law is considered one of the best in Norway.

– I wish the law could be more in line with the rapid developments in tech, says Haakon. – Typically, the law lags behind technology because it is evolving so fast. It is difficult for legislators to keep up to date with such a dynamic field. Being able to help out on this matter would be a dream come true. Another area of ​​interest is to assist in making the law, including legal assistance, available to everyone in better and more efficient ways, using technology. The legal sector is in many ways a very old-fashioned industry, with room for lots of improvement, Haakon concludes