Roberto Coll got the opportunity to go to Glasgow for COP26 during his master’s in Public International law. The event kickstarted his career. 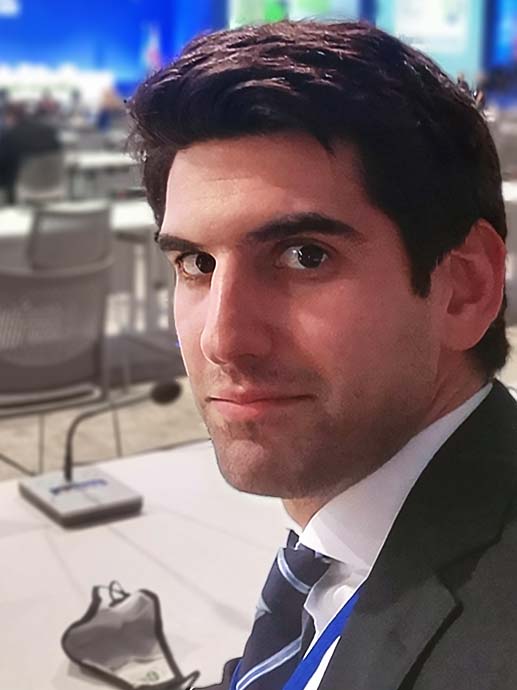 Besides classes and studies, there are lots of opportunities at the University for making friends and getting your face around (photo: private)

Roberto Coll works in the World Commission on Environmental Law (WCEL). It is a network of environmental law and policy experts from all regions of the world volunteering their knowledge and services to IUCN activities.

– I signed my contract very recently, but I’ve already been collaborating with them for a couple of months with different assignments. My role is mainly linked to responsibilities related to WCEL events: proving organizational support, preparing reports for publication on WCEL website, preparing draft notes and news, and providing social media coverage. In addition, I support the Chair of the organization on a running basis with smaller research tasks, draft of statements, and source checks, Roberto says.

– Professor Christina Voigt, who was my thesis supervisor, was recently elected Chair of IUCN-WCEL. A few months ago, she announced the possibility to attend COP26 in Glasgow as an observer for the university. I joined two other students and two teachers in going there. Professor Voigt also asked me if I was interested in providing support for her work in WCEL. I accepted and it was a great experience. Some weeks later, when we were back in Oslo, I was offered the possibility to work more steadily with WCEL since the organization needed assistance on a more regular basis. After the Glasgow experience, I enthusiastically accepted the offer, Roberto says.

–  For someone who studied international environmental law, going to a COP conference means almost the same as what it is for a football player to go to the World Cup, he laughs.

Roberto considers that the master’s program he did at the University of Oslo gave him very good knowledge on where to look for relevant information.

– When specialists talk about different conventions they refer, for example, to Paris or Rio. They refer to what happened there and the provisions in those documents by naming the city where the convention took place and the number of an article. For an outsider, it’s probably not easy to understand, but through studies, you get to learn what the different conventions were about. In this field it’s very important that you keep up to date on new developments and to follow congresses and conventions, he says.

Roberto also thinks that it’s important to know how to relate to the international milieu and the people working in this field.

– The master’s program has a good international environment which helps you very much in this regard, he says.

When asked if Roberto has any advice for students that wishes to work in the environmental law field, he says that it is important to know of and use the opportunities the university gives you.

– These opportunities go under the radar for some students, not because they aren’t published, but I think that many students don't take advantage of all the opportunities that the university gives them. Those opportunities are great to get to know people, to learn and to network. My advice is to go to events, go to social meetings and join groups or associations. Don’t be scared and try everything that you might be interested in. This is a great way to make friends, as well as to get your face around and to get in touch with the professors, he says.

Roberto especially noticed that the professors of the University of Oslo were very available and helpful.

–  Courses at UiO are taught by full time professors, and they can be a great support for you, he says.

– What are your further career plans and dreams?

– Right now I feel like I’ve landed in the right place, even though I am not working full-time yet, Roberto says. – I get to learn a lot. For example, in Glasgow and Rio I got to meet people I had only read about, people that I admired. And they were willing to give advice and share their knowledge. Right now, I’m just trying to learn as much as I can. I graduated very recently, but I think the dream of every international law student is to work in an international organization, like the UN for example.