It is my pleasure to write a memoir of my time at RITMO as the first PhD in and out of the centre. 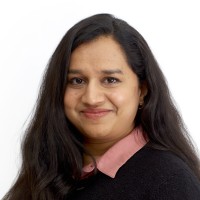 Tejaswinee Kelkar worked at RITMO from the centre's beginning and until May 2020.

Moving into the Centre

I moved with the centre in the autumn of 2018 from the Department of musicology at UiO. It was only about a kilometre from our previous office. Still, it was quite an astonishing beginning for me, both in terms of moving away from a familiar office and my friends and building and participating in a new culture in a new research team that would be built among us all from scratch. But the range of care, opportunities and access to resources that the centre has brought to me have been incredible.

The empirical work is based on sound-tracing as an experimental paradigm. This brings together the multimodal mappings of pitched sound, gestural imagery evoked by these sounds, and defining geometries of these contours. Two sound-tracing experiments were conducted, resulting in three datasets that have been used in the analyses.

The sound analysis is based on signal processing algorithms for pitch detection and methods for contour representation. Cross-correlation of the data is performed using statistical hypothesis testing methods to canonical correlation analysis. I am especially thankful to my supervisors Prof. Alexander Jensenius and Prof. Rolf Inge Godøy, and collaborator Prof. Bruno Laeng.

The leap from the Four Ms lab at IMV to RITMO and its various labs saw huge changes in the research environment, and the use of lab resources, and the myriad ways in which people thought about musical movement. The introduction of the EEG lab, and the interaction lab, and so many brilliant scholars in these areas made the environment at least 3 times as exciting and about 9 times more diverse (figures based on rough estimates). The additional funding provided a huge boost in visiting researchers and also to plan research trips with other universities for us. There have also been a number of collective workshops and invitees, giving a really broad perspective to all young researchers. The motion capture workshop and the NordicSMC workshops have been special highlights for me.

The network of colleagues expanded manifold. It has been really fun to go to conferences together, gather in the huge cosy meeting area, plan for various exhibitions, concerts, conferences, and parties, and listen to each other intently the many meeting and feedback sessions. Interdisciplinary work takes time and for us to really listen and understand each other’s’ disciplinary viewpoints and visions, and RITMO is a one-of-a-kind environment in this regard.

During my PhD, I worked with body motion in the context of melodic contour. I published two papers that are in my PhD during that year and the PhD thesis itself. When I moved to RITMO, I was only doing the work of writing up my thesis, and I used to be there from morning to late at night. My last year at RITMO was a teaching year, where I taught a coding camp for girls in music tech, worked on WoNoMute sessions, and taught at the MCT master’s program.

Through this time, I have seen our own flea markets, dogs, the crying of me and others in various levels of stress, the comforting of others and hopefully myself, the gatherings that grew like a snowball in small meeting rooms, and around whiteboards, and the absolutely fun annual meetings that we have had. I left shortly after the corona lockdowns made everything harder. I defended my PhD last November, and I was a part of RITMO until May, but our collaboration continues, and I am very thankful for that. I wish the centre lots of success and will always owe it a lot.

By Tejaswinee Kelkar
E-mail this page