Anne Marie Aanerud is a political advisor for The Minister of Agriculture and Food. 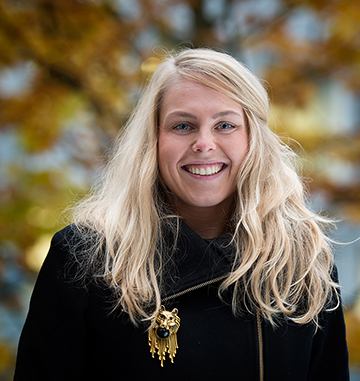 Anne Marie Aanerud has also worked for the UN in New York.

How did you get your current job?

After I had finished my Master's degree I worked for the United Nations in New York for a short while, and I also worked for The Norwegian Ministry of Foreign Affairs.

Then I got a job as a political advisor in the Committee on Foreign Affairs and Defence in the Norwegian Parliament (Stortinget). When the MP I worked for was appointed as Minister of Agriculture and Food, I continued to work as his advisor, this time in the Ministry of Agriculture and Food (in Office from 2009 - 2013).

What did you write about in your master’s thesis?

My thesis was about the peace negotiations in the wake of asymmetric conflicts.

How do you use you education from PECOS in your job?

In all my positions I used the PECOS competence directly or indirectly. I've had good use of what I learned about negotiations in the program.

In my current position I use my education more indirectly. Now it’s more about a general political understanding, which I gained a lot of during my time as a PECOS student.

What are your main responsibilities?

My schedule follows the Minister's schedule, which makes my work day very varied. As a coordinator of his work day, I facilitate interviews, talk to the press, and plan the Minister’s travel schedules, domestic and abroad. My job is also to monitor the political processes that take place in the ministry.

What are you working on right now?

Right now there is a lot of work related to the yearly negotiations between the state and the agricultural sector. I also work with the wood processing industry, which is currently in a critical situation.

In addition to this, we are working on so-called “matmakt” (food power). This is a term that focuses on power relationships in the food value chain, from production to the food ends up on the kitchen table.

What are your best tips for students who want to become more attractive in the job market?

Make good use of your time as a student. By that I mean that you should study hard and exploit the opportunities the PECOS program offers. Administers in the program are very helpful on network building, and they can get you in touch with relevant people and communities. I have used these contacts a lot myself, and it has been very helpful to me.

Employer:
Ministry of Agriculture and Food