Official opening of the International Summer School. Following the opening ceremony, all ISS participants, faculty, and staff members are invited by the City of Oslo to a reception at the City Hall. 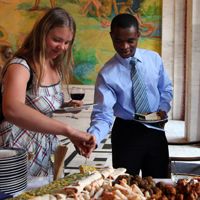 After the ceremony, the City of Oslo will host a reception at City Hall, which is also the venue for the presentation of the Nobel Peace Prize each year. We ask attendees to dress in formal attire for the festivities.

As we are guests of the City of Oslo it is not possible for the International Summer School to extend the guest list to include others not officially connected with the ISS.

Invitations that serve as entrance tickets will be handed out during registration. Do not forget to bring it to City Hall!

Buses leave promptly 18:15 and will not wait for latecomers!