The 5th edition of MusicLab was a virtual algorave. Prominent algoravers Renick Bell and Khoparzi improvised live-coded music on their computers from their respective locations in Japan and India, while the audience danced to the rave music in their homes all over the world. This event was also the launch of our brand new MusicLab App! 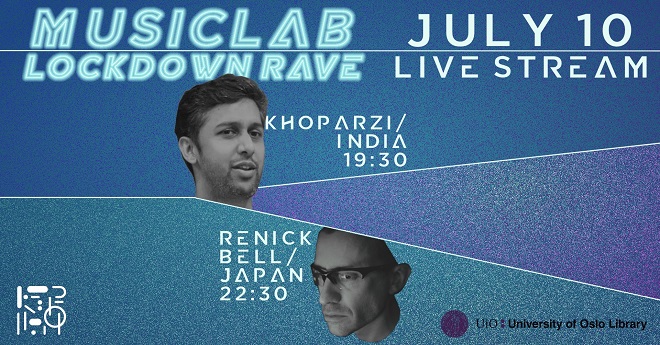 The 5th edition of MusicLab was an algorave (algorithmic rave) featuring Renick Bell based in Japan, Khoparzi based in India, and researchers in Norway. Renick Bell and Khoparzi live-streamed improvised live-coded music on their computers while the audience danced at home. We measured audience members' movement using our new MusicLab mobile application that uses smartphones' accelerometers and gyroscopes. We also asked questions about the experience of the concert.

About the algorave performers

Renick Bell is one of the leading figures of the algorave movement. Mixmag magazine has called him “one of [the algorave] scene’s more flabbergasting producers,” and Resident Advisor calls him “Algorave kingpin” and writes that “watching him make his music is just as fun as dancing to it.”

Bell improvises bass-heavy algorithmically generated music full of percussion and noise by live coding with open source software, including software he has written called Conductive. Each performance is new and unique, unheard before the event even by Bell, with his live programming activity projected for the audience to see.

In 2019, he was selected by Aphex Twin for the latter’s first-ever curated event for The Warehouse Project in Manchester, UK, where he headlined the Archive Room stage. In 2018 he released an album called Wary on 2018 Grammy-nominated producer Rabit’s Halcyon Veil label and another called Turning Points on Seagrave Records, which was a critical success, including being ranked 19 out of “The 50 best albums of 2018” by FACT magazine. He has releases on Lee Gamble’s UIQ label, Berlin-based Conditional Records and Saplings Records, among others.

His music practise corresponds with a research practice of writing software and writing research papers on live coding, electronic music, and art, as well as teaching in university and other contexts. Based in Tokyo since 2006, Bell has lived in Asia since 2001. He is originally from West Texas.

Abhinay Khoparzi AKA Khoparzi is a multidisciplinary creative technologist who maintains a practice across film, video, music and web technologies. Having always tried to run away from being put in a box he has in turns been a consumer, critic, and maker of tools that allow him and others to make experiences that make us think, play and inform.

He is interested in using technology itself as a medium that can be moulded into various form to tell stories and build experiences. To this end, he collaborates with various artists, and technicians to tackle creative, interactive and technical challenges, and explore various permutations and extensions of art.

As a musician and sound artist he has performed experimental electronic music at venues and events like The Indian Electronica Festival, (Blue Frog, Mumbai), 6 Foot Oscillator in a 4 foot Room (Zenzi Mills, Mumbai), Floatsam with Mukul Deora and Piere-Paolo Allesanderello (Volte, Mumbai), and other collaborative performances with artists like Kargo Pluggy, and Sadahnmo from the 3rd Thought Entertainment roster.

Since 2018 Abhinay has been collaborating with artists from all over the world with network music performances with the intercontinental live coding ensemble Supercontinent and with remote ensemble Algomech which is a collaboration between CiLC Argentina and Algorave India.

As always, MusicLab is free and open to all, but you need to reserve your spot via Facebook or by contacting PhD fellow Dana Swarbrick.

MusicLab is an innovation project by RITMO and the University Library. The aim is to explore new methods for conducting research, research communication and education. The project is organized around events: a concert in a public venue, which is also the object of study. The events also contain an edutainment element through panel discussions with world-leading researchers and artists, as well "data jockeying" in the form of live data analysis of recorded data.