Pictures, videos and presentations from the Oslo Life Science Conference 2017 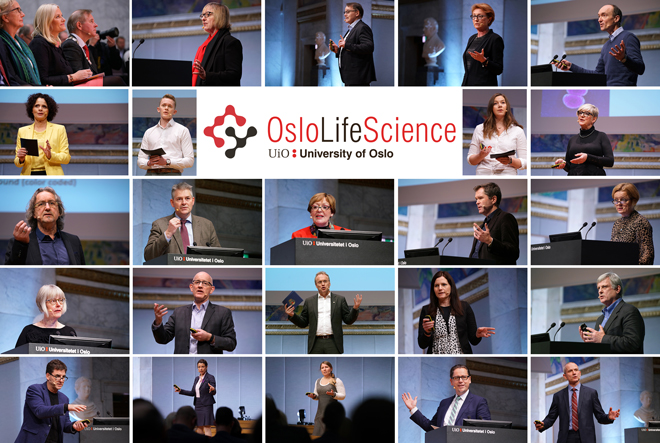 We hope to see all of you again at Oslo Life Science 2018. The dates for the conference will be announced in the spring.

Researchers from five faculties will talk about their work at the Life Science Lunches in March and April. The brain with perspectives from biology, physics, informatics, psychology and musicology is central in the March event.

The UiO festival 12th of May: Academic after-party on memory (in Norwegian)

Events this spring that have received funding from UiO:Life Science

Apply for conference or other event support

Academic employees and students at UiO can apply UiO:Life Science for funds for partially financing of open events that are in line with the initiative's strategy. The next application deadline is the 1st of June 2017.

We received 22 applications within the application deadline the 1st of March. The applications have been sent to international experts for review. The expert panel will meet in Oslo in the end of April to evaluate the applications, before the UiO:Life Science board makes the final decisions.

The innovation work in UiO:Life Science is underway

According to the UiO strategy for life sciences, UiO:Life Science shall promote innovation for environment and health. Four working groups with internal and external participants have started to explore what actions the initiative should take in 2017.

Professor Per Ottar Seglen has been awarded King Olav V’s Prize for Cancer Research 2017. He has worked at Oslo University Hospital, the Norwegian Radium Hospital and is now a guest researcher at Centre for Molecular Medicine Norway (NCMM) at UiO. He gets the prize for his work on autophagy – cells' self-eating – which is important in the body's defence against several diseases, for example cancer. The prize ceremony is the 6th of June.