The use of medicines during pregnancy: The challenges of disseminating research

For some researchers, good and balanced dissemination of research is particularly important, as the results they convey can have major consequences for others. This is the case for researchers at the University of Oslo who are investigating how the use of medicines during pregnancy can affect the development of the foetus. Interdisciplinary cooperation will take their research a step further. 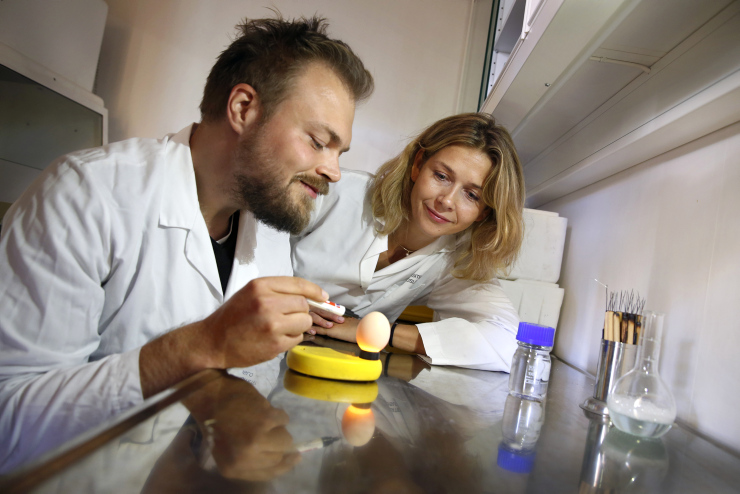 Hedvig Nordeng and Lars Engeset Austdal who tries to find out how drugs, for example paracetamol, affects chicken embryos in order to try to understand which underlying biological mechanisms may be involved in observed disorders among children. Austdal is one of the young research talents in PharmaTox. Photo: Terje Heiestad, Millimeterpress.

Researchers at the University of Oslo work closely with RELIS – a national network of regional medicines information and pharmacovigilance centres. RELIS has specialists in medicines and specialists in the use of medicines by pregnant women and nursing mothers. According to Nordeng, many questions are received on this subject from health professionals.

“The project on safe medicine for mothers (Trygg Mammamedisin)  is run by RELIS, and has been running for four years. Expectant mothers can contact the project and ask questions. This is a great public service where the information given out is free from bias by pharmaceutical companies. The abundance of incorrect and subjective information online can scare pregnant women into not taking the medicine they need."

At the School of Pharmacy at the University of Oslo, Professor Hedvig Nordeng and her colleagues are investigating how the use of medicines affects the foetus in the womb and the development of the child’s brain.

“Traditionally, we have only counted fingers and toes and checked the birth weight – what we call immediate pregnancy outcomes – when investigating whether a drug is harmful to a foetus. However, safe use of medicines extends much farther than the point of birth – we need to know the long-term consequences”, says Nordeng.

“In the studies we're conducting now, we plan to examine behaviour, temperament, motor skills, language and behavioural disorders such as ADHD. The reproductive safety of medicines is not mapped until we know something about the certainty of these outcomes over time.”

Nordeng goes on to say that not many research communities in the world have the opportunity to follow a large number of children over a number of years in the way we can in Norway. In the United States for example, most major data sources have no information about children over the age of one. Norwegian researchers therefore make interesting collaboration partners. The Norwegian health registers, in this case the Medical Birth Registry of Norway and the data from the Norwegian Mother and Child Cohort Study, enable Norwegian researchers to conduct such studies.

Not taking medicine could be worse

The research findings have a direct impact on what medicines the researchers recommend pregnant women should take or not take, and they give careful consideration to how to convey the risk.

“This is one of the most difficult things we do, as we provide information on risk at the population level, but we cannot know the risk for the individual woman. We are also very keen to highlight the risks of not taking medicine prescribed, and our findings show that for many women who have a mental illness it is better for both mother and child that the woman takes the medicine rather than go untreated during pregnancy,” emphasises Nordeng.

“We also communicate this to the doctors who are responsible for prescribing the medicine. If they have a variety of medications to choose from, our findings may help them to select the safest alternative.”

For researchers, it is also important to convey the absolute risk of using medicine. If the risk of a child suffering side effects, for example, increases from 1 in 1 000 to 2 in 1 000, the risk is doubled in relative terms, which according to Nordeng can easily be sensationalised by the media, but the reality is that the risk goes from 0.1 per cent to 0.2 per cent, so the absolute risk is nevertheless very low.

Could influence the information provided by the authorities

The researchers have contact with the authorities when the need arises.

“We have close contact with the Norwegian Medicines Agency, which also provides information on the use of medicines, and we have a strategy for how to communicate the results to the public. We sometimes also notify the Norwegian Directorate of Health when matters of interest to the Norwegian authorities arise, so that they know what's coming. The last time we contacted them was before a new study on the prevalence of smoking during pregnancy”, says Nordeng.

Some of the studies not only reach the Norwegian authorities – they are also discussed by European authorities.

“Our article on the use of paracetamol and behavioural problems in three-year-olds was the subject of a meeting of European medicines agencies. The discussion revolved around whether they should amend the information provided in light of this finding. Since paracetamol is one of the most commonly used medicines among pregnant women, even a small increase in risk can have a major impact on public health. We were also in contact with the Norwegian Medicines Agency in connection with this matter because they are responsible for keeping track of reported side effects.”

“We are now conducting follow-up studies to examine whether the findings were random or not, and to try to understand which underlying biological mechanisms may be involved.”

Because the research findings are of such great significance for pregnant women, the researchers at the University of Oslo are given training in dissemination of results. This includes production of video clips in which they explain their findings. See the sample video.

“We do this in order to translate our research into understandable language because we know that the general public is interested in our results, and the last thing we want to do is to scare women into not taking the medicine they need. We discuss dissemination extensively to ensure that everyone is aware of our responsibility. A lot of preparation goes into the video clips”, notes Nordeng.

“When we are about to publish an article, we also write a summary in Norwegian, where we describe in our own words how we think the results should be interpreted. We give this to journalists as background information. We also use social media such as Twitter, where we have a voice in society.”

An interdisciplinary community has been established

Nordeng now heads the new strategic research initiative, PharmaTox, at the Faculty of Mathematics and Natural Sciences, where researchers from different disciplines are working together to take the research a step further than one discipline can manage in isolation.

“Our work is an example of how those of us who work in science can help to solve challenges in the field of medicine. We will cover the entire spectrum, from patients and the effect on humans, to explaining cellular and molecular mechanisms for neurotoxicity of medicines. Adopting a ‘bench to bedside’ mindset is crucial, i.e. from the laboratory all the way to the patient”, believes Nordeng.

“Many of today’s innovations happen at the intersection between disciplines, such as where pharmacy meets mathematics and computer science. We work together across disciplines and design projects in a collaborative effort from the very beginning. It is not the case that we pharmacists work alone and then contact, for example, statisticians or biologists when we need their expertise.”

The computer scientists at PharmaTox, Geir Kjetil Sandve and colleagues, are working on the continued development of what they call the Genomic HyperBrowser.

“This is software that analyses genetic data. They now want to develop it further to enable it to analyse both genetic data and data on illness among children. The computer scientists are pushing their own research frontier and publishing their research results within their own discipline, while their work is very useful for our joint project. There are methodological gains for everyone,” stresses Nordeng.

“We also work with the Department of Psychology at the Faculty of Social Sciences, where they have expertise in neuro development in children and the use of psychometric scales. We now have several psychologists affiliated with PharmaTox. Adjunct Professor Eivind Ystrøm joined us as recently as 1 September.”

Nordeng is committed to research results playing a central role in the teaching. “Our wish is for the new generation of life science students at the Faculty of Mathematics and Natural Sciences to be trained in interdisciplinary, generic skills, such as dissemination, writing feature articles and how to apply for patents, and we want to put more focus on career development for young talented researchers, and internationalization.”

Angela Lupattelli, whose public defence is on 11 September, is one of the young research talents in Nordeng’s group who is travelling abroad to collaborate with research groups in other countries and learn more. She visited Toronto, Canada in 2012, and spent two months in Boston, USA this summer. In Canada, she worked at the Toronto Hospital for Sick Children, which is the world's largest children's hospital. The hospital has a special ‘Mother Risk’ centre, which includes an outpatient clinic for pregnant women who are heavy users of medicine. In Boston, she underwent training in advanced statistical methods for analysing causal relations.

There are also plans for doctoral research fellows at PharmaTox to observe each another. The research fellows from pharmacy will see how the computer science and biology researchers work, and the mathematicians will observe those in pharmacy. In this way, they plan to create a collaborative life science environment and break down the traditional barriers between the disciplines. Nordeng believes this will attract more students to the science subjects and make them more appealing.

“In the past, we have participated extensively in international ventures, but have not been particularly good at using the resources on our own doorstep. We need to capitalize more on the local opportunities at the University of Oslo. There are even more groups we would like to work with at the Faculty of Medicine, the Department of Psychology and at the University environments that work with ethics and risk communication”, says Nordeng.

“The Faculty of Mathematics and Natural Sciences has been at the forefront of facilitating an interdisciplinary environment for scientific renewal, hence the establishment of PharmaTox. The same principle can be applied to the entire university.”