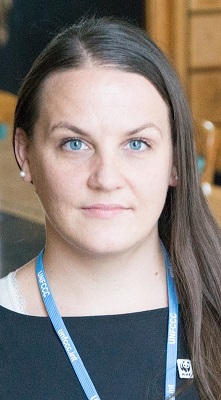 How did you get your current job?

I applied for an advertised position for an adviser in 2010. I have since become a senior adviser.

Why do you think they chose you for the job?

It was a combination of experience from social sciences and languages, and good timing. I had gained experience that made my interests look goal-oriented, experience which looked good on my CV. I studied Chinese in addition to human geography, and I used this combination when I was a Master's fellow, and later employed, at the Fridtjof Nansens Institute. As an intern at UNDP China (United Nations Development Programme China), I worked on the China National Human Development Report, on the topic of low-carbon development. That focus on environment and climate in China led me to China's international climate efforts, especially in UN climate negotiations. When WWF announced a position focusing on emission cuts and energy policy in China it felt like it was tailor made for me. Today, I work on China as well as on the climate negotiations in general.

What are your main duties?

My job is split in two. I lead a Norad (Norwegian Agency for Development Cooperation) financed project in China that deals with emission cuts. It is a collaboration with WWF China, although I am located in Norway. We work with cities and companies, and have seen many positive results. You get a lot out of small budgets by working in China and having extensive collaboration. It is very rewarding to see concrete results year after year. The other half of my work is on UN climate negotiations, here too focusing on emission cuts. In collaboration with amazing people at WWF from all over the world and other Norwegian organizations, I conduct political lobbying where we constantly try to raise ambitions in order to lower emissions. The goal is to prevent global warming above 1.5°C, and renewable energy is the solution! This work can be frustrating and tedious, but we feel that we are getting things done.

What are you working on just now?

This is mostly an office job, but with some travel and a lot of flexibility. We develop solutions and arguments, draft input to political processes, talk with politicians and decision-makers, coordinate with other organizations and try to get the media interested in our central issues.

Right now, I'm contributing to a new strategy for WWF's international climate and energy work. We have secured the Paris agreement and the UN Sustainable Development Goals, but then President Trump suddenly came on the scene. Such things really affect our work. There will be many Skype meetings with people in different time zones and a lot of writing.

I do travel sometimes, on a small number of longer trips. Due to the work on climate negotiations I am often away for several weeks, as with the Paris Summit in 2015. Travelling is an important benefit, especially since I am so fond of working with colleagues from other countries, but we also try to travel as little as possible due to the greenhouse gas emissions created from flying.

How do you apply your qualifications from the Department of Sociology and Human Geography in your work?

I use human geography a great deal, both on specific topics, but also in the way I think. Knowledge of dependency theory, geopolitics and use of natural resources are important when talking about climate justice. Knowledge about discourse analysis helps me to understand how people shape their picture of the world and how, for example, their politics is influenced by it. Most of all, I think I've learned to see things in perspective and in context. In my opinion, through human geography you will learn that yourself and your country do not exist in a vacuum but in a relationship of interdependence with the rest of the world's people and with the natural world. It affects how you see the world.

What is your top tip for students who want to be attractive in the job market?

For me, Human Geography, regional studies and languages ​​have been a good combination. I think it is a good idea to keep up with trends in how society is developing and try to predict where capacity will be needed. I myself was lucky with the timing as an expert on China's climate policy just before the Copenhagen climate summit in 2009. Now in 2017, I think the topics that will be important in the future, for example, are Norway and the EU's common climate policy, the Norwegian Climate Act, and more generally, climate financing, climate change adaptation and development within renewable energy.