Among several strong applications, the prize committee describes the nomination of Danielsen and Jensenius as being in a class of its own in terms of creativity, scientific strength and interdisciplinarity. 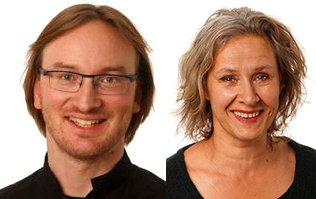 The University Board has appointed the winners of the Research Prize, Educational Prize, Dissemination Prize and Innovation Prize for 2018.

Danielsen and Jensenius are are awarded the Innovation Prize for their unique ability to draw connections between different research areas, involve external partners, and highlight the potential and added value of interdisciplinary research and its societal relevance.

The Prize Committee also emphasizes that they have been involved in the creation of an interdisciplinary research environment awarded a Center for Excellence Research (SFF) in March 2017, namely RITMO Center for Interdisciplinary Studies in Rhythm, Time and Motion.

The prizes are each of NOK 250 000 and are awarded at UiO's annual celebration.

Read more about the award. (in Norwegian)

By Ancha Wesnes
E-mail this page