– Climate has been an interest of mine since I was little. Back then I thought of meteorologists as the people who "only" forecast the weather on TV – the typical stereotype. I soon found out, however, that this was a very exciting field of study with lots of opportunities and activities, says Tobias Wolf (25). 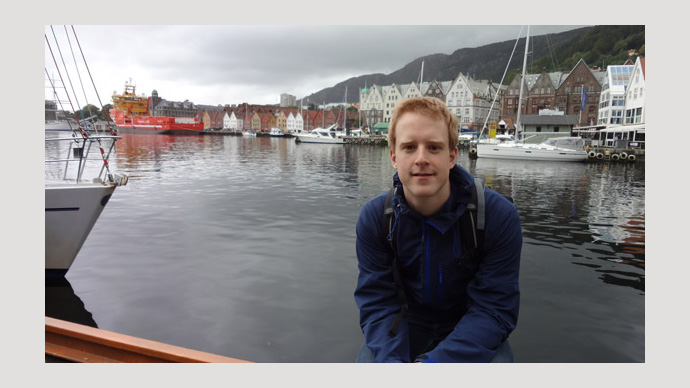 Tobias is currently doing research for a PhD at Nansen Environmental and Remote Sensing Center, or NERSC for short. NERSC is an independent non-profit research foundation affiliated with the University of Bergen, where they conduct basic and applied research in environment and climate.

– I conduct investigations on the pollution of NO2 in Bergensdalen. In order to do this, I use data from a new instrument at NERSC. This instrument measures the temperature profile at heights of up to 1000 meters, and gives information about inversions, which can allow for an accumulation of pollutants. Later I will also simulate pollution periods with a special type of model called Large Eddy Simulation (LES). This model uses a very high resolution, which is necessary because ordinary models of the atmosphere have resolutions that are too low to give us a detailed look at Bergensdalen.

The reason why Tobias chose meteorology, is partly thanks to a lecture he attended while studying abroad from TU Darmstadt in Germany.

– I went to a lecture with Patrick Espy on atmospheric physics. I decided to write my bachelor's thesis under supervision from Espy, and this is mainly what ignited my interest in meteorology. Since I wasn't sure whether I was able to study in Norwegian, but still wanted to study in Norway, the international format of the master's programme in Oslo became the natural choice for me – If I hadn't gone to that lecture, I would not have thought about studying Geophysics.

– In my case, coming from Germany, I had some difficulties with getting my time as an Erasmus student approved. Still, what I lost in time I gained in valuable experience, so I definitely recommend taking a semester abroad.