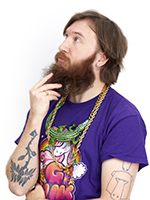 In rap music, there is a meeting between different, both musical and cognitive, streams. If one wants to be clever, you can say there are as many flows in a flow as there are beats in a beat. Among the streams we attend to when we listen to rap music, are linguistic phenomena such as syntax and phonological parallelism (i.e. rhyme), musical phenomena like cross-rhythms and figure-repetition, and some virtual reference structures that are common to both disciplines – most significantly: Metre. In both poetics and music theory, the framework of metre is central to the structuring of the artistic objects of study, and the definitions of the concept is typically very similar across the fields, describing regularly recurring pulsations that may or may not be actually explicit (there may be “silent beats”, for instance). We are, in a way, looking at the same cognitive phenomenon, just realised in two different ways in two different artistic practices.
In rap, these two artistic practices coalesce, and we get two simultaneous realisations of a common phenomenon – metre. The kicker is, though, that these two realisations does not always correlate with one another. When we analyse rap music, we need to take this into account, and use tools, representations and terminology that adequately explain and express the relationship between the poetic and musical metres. This paper will present various approaches to analyse rap flows and the convergences and divergences of the two metres at both the macro- (the relationship between "bars" and "lines"), meso- (“quantised representation”, accents) and micro- (“disagreements” in timing, ambiguous rhythms) levels. These methods will be accompanied by and presented through copious amounts of audio examples.

Kjell Andreas is a PhD fellow at RITMO, and is working on a thesis on the rhythms of rap flows, where this talk's topic is a central part. In addition to being a researcher, Kjell Andreas is also an active recording and performing rap artist in the group Sinsenfist.