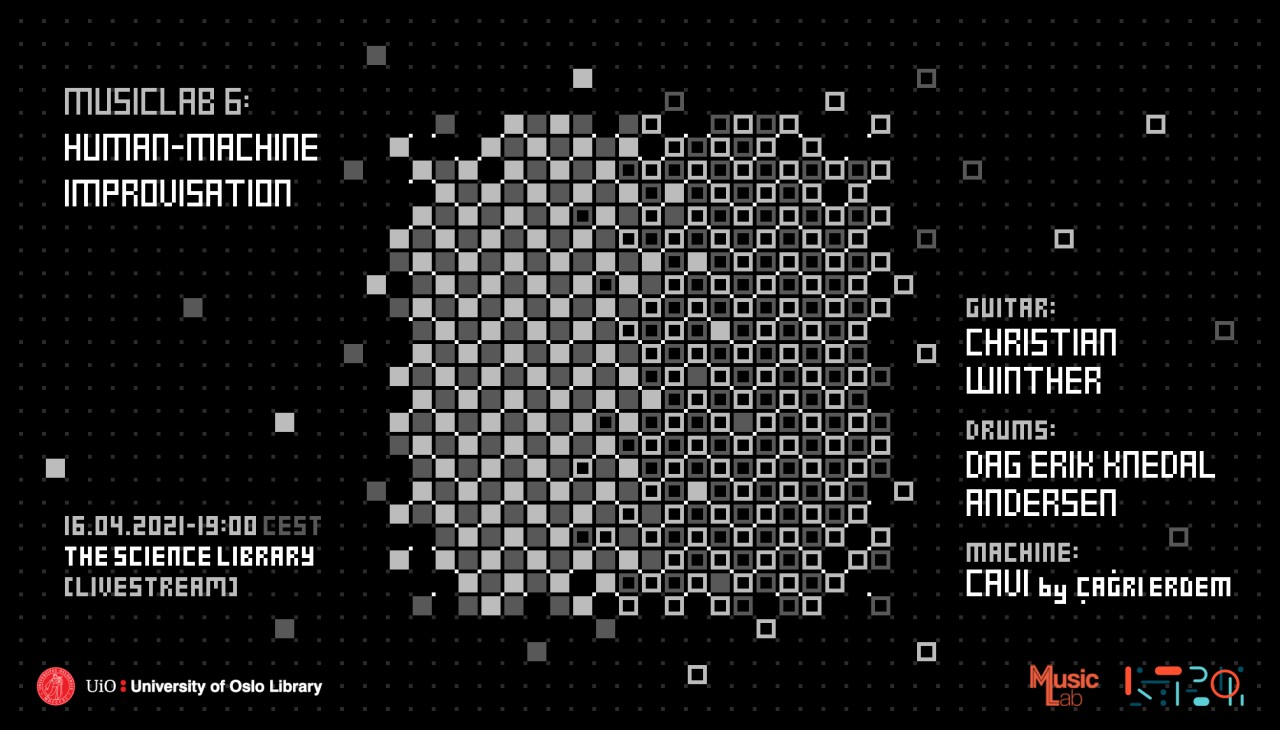 Imagine yourself playing a musical instrument while your friend messes around with electronic audio effects devices that process your instrument’s sound. You can be annoyed or waive the control and try to jam together. Now imagine that artificial intelligence replaces your friend in the same setting. That will happen in this 6th edition of MusicLab.

Two prominent musicians from Norway's improvisation scene, Christian Winther (guitar) and Dag Erik Knedal Andersen (drums) will be playing a solo improvised set, each with CAVI, a "coadaptive audiovisual instrument" developed by RITMO researcher, Çağrı Erdem. The concert will be streamed from The Science Library at the University of Oslo, followed by a virtual panel and data-jockeying. MusicLab 6 will be the closing event of The Nordic Sound and Music Computing Day.

Recording of the stream

Dag Erik Knedal Andersen (drums) is a dazzling musician bringing jazz fluidity, speed and precision to a wide variety of playing situations mostly in the field of Free Improvisation and Noise. He combines flamboyance, a hyperactive personality, and instinctive creativity to place him among the finest European drummers.

Christian Winther is an exploratory guitarist and songwriter, this year upcoming with both a debut solo album, The Clearing (Fysisk Format), and his commissioned piece Urfuglen for the Motvind festival on Nasjonal Jazzscene. Based in Oslo, he is known either through the experimental trios Monkey Plot and Ich Bin N!ntendo, the jazz collective Torg and the alternative pop duo Listen to Girl.

Stefania Serafin is a professor of Sonic interaction design at Aalborg University Copenhagen and leader of the multi-sensory experience lab together with Rolf Nordahl. She is the president of the Sound and Music Computing association, project leader of the Nordic Sound and Music Computing network and head of the Sound and music computing Master at Aalborg University. She received a PhD entitled “The sound of friction: computer models, playability and musical applications” from Stanford University in 2004, supervised by Prof. Julius Smith III. Her research on sonic interaction design, sound for virtual and augmented reality with applications in health and culture can be found here.

Nanette Nielsen is an associate professor at RITMO. She works on music and philosophy – especially intersections between ethics and aesthetics – and has a particular interest in film music, popular music, and opera and music criticism. Her publications include the co-authored book Music and Ethics (2012), the monograph Paul Bekker’s Musical Ethics (Routledge, 2017), and The Oxford Handbook of Western Music and Philosophy (Oxford University Press, 2020).

Anna Xambó is a senior lecturer in Music and Audio Technology at De Montfort University and a member of the Music, Technology and Innovation - Institute of Sonic Creativity (MTI2). Her research and practice focus on sound and music computing systems looking at novel approaches to collaborative, participatory, and live coding experiences. Her solo and group performances have been presented internationally. She is the PI of the EPSRC HDI Network Plus funded project "MIRLCAuto: A Virtual Agent for Music Information Retrieval in Live Coding" and has taken leading roles in organisations with a special interest in improving the representation of women in music technology.

Concert production by the University Library