The researcher Geir Åge Løset established the company Nextera on the basis of his own research at UiO. He believes that innovation is a state of mind that needs to be inculcated from the very start of studies. Nextera’s groundbreaking technology facilitates the development of new, targeted drugs that can treat chronic inflammatory and autoimmune diseases with fewer side effects, and thereby benefit society considerably. 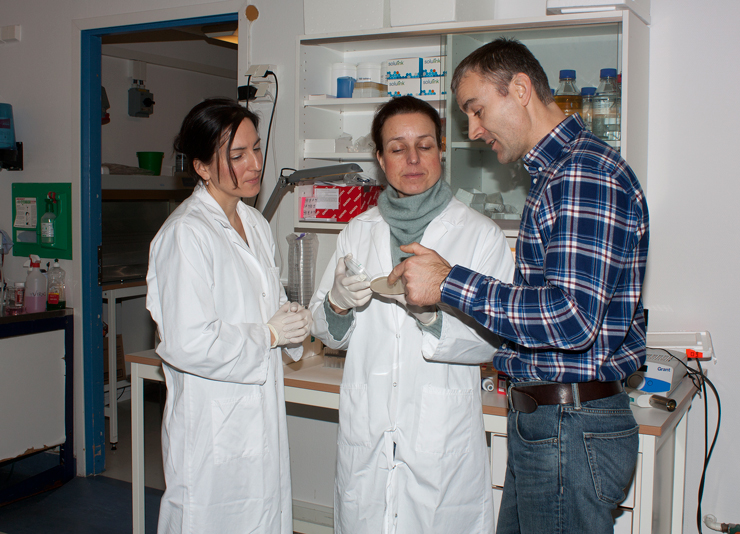 The biotechnology enterprise Nextera studies chronic inflammatory and autoimmune diseases. In both cases, the body attacks its own cells and tissues. Rheumatoid arthritis, diabetes, multiple sclerosis (MS), narcolepsy and Chron’s disease are all examples of such diseases. Nextera seeks to find out what triggers and drives these diseases, with a view to finding targeted treatments.

‘Today we don’t know why some people develop these diseases and some people don’t. We know that the immune system is directly involved and that a special type of white blood cells called T-cells are the key, but we don’t know what causes these T-cells to react. For some of these diseases we have genetic markers that indicate a congenital risk, but as of today this cannot be used for treatment purposes,’ says Geir Åge Løset, Chief Scientific Officer of Nextera.

‘We just don’t understand the disease mechanism. As a result, a large number of patients receive inadequate treatment. We provide palliative treatment of symptoms to the greatest extent possible and try to stop the disease from progressing. The results here are often poor, and the treatment has major adverse effects over time. Most of the patients undergo life-long treatment with costly drugs over long periods, and many of them have a reduced ability to work. This is a major financial burden on society.’

Løset believes that Nextera’s technology will be able to provide a more precise diagnosis, and that it can be used to develop new and more targeted drugs to treat all of these diseases. This will make the drugs more effective and involve fewer side effects.

Basic research is the key

In addition to his job as CSO of Nextera, Løset is a researcher at the Department of Biosciences, Faculty of Mathematics and Natural Sciences, and a member of Professor Inger Sandlie’s research group at the Centre for Immune Regulation (CIR). This is a centre of excellence in research based on a collaboration between the Faculty of Mathematics and Natural Sciences and the Faculty of Medicine at the University of Oslo (UiO) and Oslo University Hospital.

The key question in Nextera’s research is: What are the components that trigger and drive each of the autoimmune diseases? Finding the answer is the cornerstone of Nextera’s business concept.

‘Our work is based on a deep understanding of fundamental immunological mechanisms, which is the subject of our research at the Centre for Immune Regulation. Basic research is the key,’ Løset emphasizes.

Nextera’s technology can also be used to develop better treatment for various forms of cancer.

‘There is a revolution going on in immune oncology – cancer treatment in which the patient’s immune system is mobilized to fight the disease. Nextera is actively working on this in the area of leukaemia.’ ‘In autoimmune diseases as well as cancer, the immune system is under attack. In autoimmune diseases, it attacks cells that it should not attack, while in cancer it does not attack cells that it should attack.’

Collaboration on arthritis with a major pharmaceutical company

In order for Nextera’s work to benefit people with autoimmune diseases, Nextera or someone else needs to take the research to the next stage. In the autumn, Nextera signed an agreement with Janssen Biotech, Inc.; one of the pharmaceutical companies in the Johnson & Johnson group, which is one of the world’s largest manufacturers of drugs.

Their collaborative work concerns targeting Nextera’s technology on arthritis, which is one of the largest groups among the autoimmune diseases.

Løset tells us that Humira (from the pharmaceutical company Abbvie), which is the most advanced drug for the treatment of arthritis and was the world’s most lucrative drug in 2015, only relieves symptoms. In addition, it has no effect on many of those who need treatment.

‘Arthritis is a chronic inflammatory disease, but we don’t know what the immune system is reacting to. Until now, the treatment has therefore involved suppressing all inflammation. In some ways, we can say that the immune response is put into low gear to make the patient feel better. The price we pay for this is among other things that they are far less equipped to fight off other natural infections, and perhaps even cancer.’

Løset is an expert on so-called phage display. He explains that this is a biotechnological method in which they combine parts of our immune system with bacteriophages – viruses that infect bacteria. This is like a sophisticated ‘fishing rod’ in the test tube that they use to detect designer molecules that bind tightly and specifically to each other.

‘Antibodies – the body’s own target-seeking molecule – have revolutionized modern medicine because of this property, and six of the ten best-selling drugs in the world are based on antibodies.’

‘And now the fusion of antibodies and phage display has revolutionized modern drug development. Humira is the first of a series of last-generation antibodies that has been developed with the aid of phage display.’

Løset explains that in the case of arthritis, they now know what parts of the immune system are affected and what type of molecule triggers the responses. These are so-called MHC class II proteins – HLA II – often referred to as histocompatibility molecules. However, due the unstable nature of these molecules, it is the exception that anyone manages to move these molecules into the laboratory. Nextera has now succeeded to change this with the aid of its own technology, which is a completely new and groundbreaking tool that the world has never seen before.

‘The HLA molecule is a genetic marker for the development of autoimmune diseases, and is the molecule that activates the T-cells that cause inflammation. By fusing HLA with phage display we have made the world’s most sophisticated ‘fishing rod’. This means we can ‘go fishing’ in those of the patient’s T-cells that we suspect are causing the disease, and let them tell us themselves what they are reacting to. Thus, we will have identified the target for our drug!’

You can read more about MHC and HLA at ndla.no (in Norwegian).

From idea to enterprise

The idea for the phage display technology used by Nextera occurred to Løset during his period as a post-doctorate student in Australia in 2006. In 2009, the enterprise was established in the form of the commercialization company Bio-Medisinsk Innovasjon AS. Many ideas have subsequently been developed in collaboration with Professor Inger Sandlie and others, and incorporated into the enterprise through licensing from UiO’s innovation company Inven2.

Løset has previous experience from the biotech company Affitech, which produced antibodies with the aid of phage display for use in target-seeking drugs. Following that, he spent more than ten years at the Department of Biosciences and the Centre for Immune Regulation (CIR) as a researcher in Professor Inger Sandlie’s group. According to Løset, the collaboration with Sandlie and the Centre for Immune Regulation has been absolutely vital to Nextera achieving its current level of success.

He is now taking leave to concentrate more on the enterprise, which currently employs eight people and is one of many small biotech companies that are located in Oslo Science Park (Oslotech), where UiO is the largest owner.

‘Innovation is a state of mind’

Løset is concerned that better systems must be created that enable young researchers to test their ideas and use their creativity to establish enterprises and thereby create jobs. In addition to support for excellence in research, he calls for more capital to be injected into high-risk projects at a very early stage.

‘If we look at the Boston region, which is the most productive biomedical cluster in the world and includes Harvard University, MIT and the Whitehead Institute, we can see that they launch hundreds of businesses to ensure that at least a few survive. In comparison, we launch only a few here at UiO, which means there is a risk that none of them will survive. This is a ‘numbers game’ that depends on a lot more than just good fundamental technology. We need to increase the volume, and we must be allowed to fail,’ he believes.

‘To avoid a scenario where only older researchers’ ideas are realised through others after several decades, the university needs support systems that can welcome young people who want to try their luck as entrepreneurs. Innovation is a state of mind that must be learned during studies. Active provision must be made for the entrepreneurs!’

A venture fund for innovation outside the university is at the top of Løset’s wish list.