UiO UiO:Life Science
Main navigation
Back to uio.no
Sub navigation Menu
News and events > Research News > 2016 > From the lab to vaccines that fight cancer and infectious diseases
Norwegian version of this page

From the lab to vaccines that fight cancer and infectious diseases

‘To reach the stage of a clinical trial is exciting and challenging, and such a huge step,’ says Agnete B. Fredriksen, Chief Scientific Officer at Vaccibody, as she describes the process of taking her vaccine research further to a company that tests its products on humans and has built up a network of global partners. 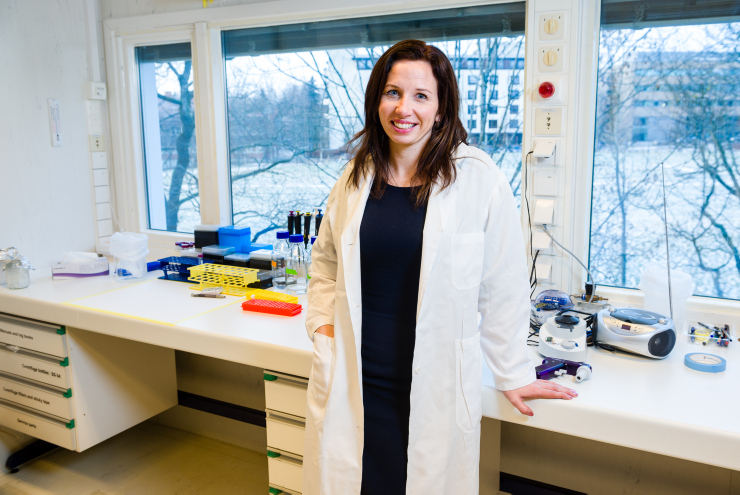 Agnete B. Fredriksen is Chief Scientific Officer at Vaccibody. Together with her MSc and PhD supervisors at UiO, she invented the technology used by Vaccibody to create vaccines to treat cancer and fight infectious diseases. The picture shows Fredriksen at Vaccibody’s laboratory in Oslo Science Park (Oslotech), where UiO is the largest shareholder. Photo: © UiO/Øystein Horgmo.

Vaccibody develops targeted DNA vaccines designed to kill cancer cells, bacteria and viruses. One of its vaccines is now being trialled on humans for the first time. The trials are being conducted at four different hospitals in Germany, where more than 20 women with cervical cancer have been offered the vaccine as an alternative to surgery, which is the standard form of treatment today. The cancer vaccine is a treatment vaccine – not a preventive vaccine.

Cracking the code for effective vaccines

Vaccibody is also developing vaccines against other types of cancer and infectious diseases. They create different varieties of vaccines and test them in the laboratory. The vaccines are then tested in the animal department at Oslo University Hospital, the Norwegian Radium Hospital to check that they produce an immune response in mice. They also make vaccines that are tested elsewhere. The vaccine being used in the current clinical trials is manufactured in a factory in the UK.

Chief Scientific Officer at Vaccibody, Agnete B. Fredriksen, believes they have cracked the code for how to make effective vaccines. She developed the vaccine technology in collaboration with Professor Inger Sandlie at the Faculty of Mathematics and Natural Sciences at the University of Oslo (UiO), who was her MSc supervisor, and Professor Bjarne Bogen at the Faculty of Medicine at UiO, who was her PhD supervisor. It was during her time with Professor Bogen in 2002 that Fredriksen was tailoring vaccines that produce an immune response, and which today has resulted in Vaccibody. A lot of the research is still conducted in the laboratory of Professor Bogen.

In addition to heading up the research at the company, Fredriksen now works in business development, has contact with investors, and works on patents and contracts. Vaccibody has more than 100 partners who work for them on a part-time basis around the world.

Martin Bonde from Denmark was appointed Chief Executive Officer in the autumn. He has broad experience from many different biotechnology companies in the Nordic region and the USA.

Fredriksen emphasises how the funding from the Research Council of Norway’s programme User-driven Research-based Innovation (BIA) programme has been and still is vital to her work.

By Norunn K. Torheim. Translation by Akasie.
E-mail this page