Food & Paper: The relation between groove and syncopation is intricate – not any pattern will do (Sioros)

George Sioros, Postdoctoral Fellow at RITMO, will present his talk: "The relation between groove and syncopation is intricate – not any pattern will do". 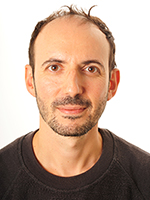 Groove is often understood as the pleasurable sensation of wanting to move to music. A series of studies has attempted to understand the function of this phenomenon by examining its relation to physical properties in the sound signal and found, among other things, that groove increases at optimal levels of syncopation. We tested if the amount of syncopation is the critical factor, rather than the specific pattern of notes that are syncopated. To this end, our algorithm transformed ten short funk and rock loops consisting of drums, bass and keyboards to 1) remove the original syncopation, and 2) introduce various amounts of new syncopation. The examples were then rated by listeners. While the ratings were highest for the original versions, as expected, the algorithmic variations were not rated higher than the deadpan versions of the loops.

Apparently, our algorithm failed to recreate the groove of the original music. Comparing the original and algorithmic syncopation we found: (1) The algorithmic syncopation is relatively uniformly distributed across the instruments, while the original versions have less syncopated drums with almost no syncopated hi-hats, and the back-beat snare never syncopated. (2) The original syncopation forms more and longer cross-rhythmic or metrically shifted patterns, as often encountered in the funk style. (3) Differences in the micro-timing alignment of sounds. In conclusion, groove is greatly increased by syncopation; although, not necessarily by syncopation per se, as the results point to several structural factors that may be important and can be further tested and add to our understanding of the functional properties that underlie the sensation of groove.

George's main research interests revolve around rhythm perception and generation. He has worked extensively in the development of automatic rhythm generation algorithms and its applications, the modeling of syncopation and the study of the sensation of groove. In his post-doctoral project, he is studying the (spontaneous) body movement to probe the interaction between rhythmic features, such as syncopation and micro-timing, and the perception of rhythm. In parallel, he is developing tools for the quantitative analysis of timing in music performances.

Before joining RITMO and the TIME project in 2017, he was a member of the Sound and Music Computing Group of INESC-TEC in Porto since 2010. In 2016, he obtained a PhD in Digital Media from the University of Porto. He holds a Master's degree in Technological Applications of Physics and Mathematics, and a Bachelor's degree in Physics. In parallel, he studied classical piano and music theory at the "Athens Orfio" Conservatory.