Can you stand still for several minutes? Then you should participate in the annual Norwegian Championship of Standstill.

The Norwegian Championship of Standstill is a competition in which the participants stand still for 6 minutes, with and without music.

The competition is part of research on music-related body motion at the University of Oslo. The aim is to understand more about how music influences human body motion. Looking at how people stand still, both with and without music, helps the researchers to learn more about this particular human activity.

The championships are run once a year, often in connection with the UiO Open Day.

The championships are organised in the fourMs motion capture lab at the University of Oslo. The setup can be seen in the 3D-image below:

We use a high-speed motion capture system that can track body motion with millimetre precision. You will get a small marker on the head, and with this, we can measure your micromotion while you stand still. We use the data from the marker to calculate the average speed of your movement (in millimetres per second). The one with the lowest score wins! To learn more about motion capture, have a look at this video from Music Moves:

What do we measure?

If you would like to, you can get plots of your micromotion (similar to the ones to the right). The graphs show information about the position in the three dimensions, as well as speed and acceleration. Read more about the plots.

What does the participation entail?

Participation is voluntary, and you can withdraw at any point in time, without an explanation. Anonymised data will be made openly available in the Oslo Standstill Database.

What are the research results?

The research has been presented in several scientific articles:

Is there a more popular description?

Read a feature story about the MICRO project.

The championship is open for everyone that wants to participate. No person-identifiable information will be captured nor stored. 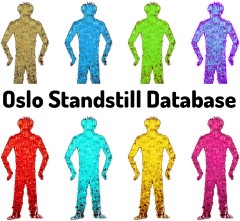 Read more about the related projects: